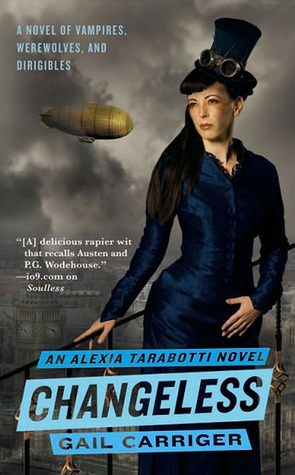 The second book in the Parasol Protectorate series, and we finally have a kick-ass parasol making its acquaintance. Plus sweet romance, something is happening to the supernatural beings, Madame Lefoux (squee) pops up, and lots and lots more.

It took me some days to read this as I didn’t have time + this book was a bit tedious at times.

This mostly had to do with the constant name switching. Keep to one name. Either call her Alexia or Lady Maccon, but don’t switch between them all the time, every other sentence or even in the same sentence. And those aren’t her only names. The other characters also experience this problem, and it just distracts from the story. I am happy that they are all know under such various names, but really….

Plus I also had trouble getting in this book as I didn’t exactly remember what happened in book 1 any more. It has been 4 years since I last read it. I could have re-read it, but I just wanted to get to the next book. Eventually I got into the book and I was immersed in the story again.

But there is a lot of good about this book. I loved the interactions and romance scenes between Conall and Alexia. swoons They were just absolutely fabulous, they really complimented each other. One may think that people would be turned off by Alexia’s sharp tongue, but Conall is also not one to stay quiet, and he has his ways to handle Alexia. 😛 They make a perfect couple, and I can just see the love between them.

Lord Akeldama, one of my favourite characters, also pops up and I was just delighted to see him again. He is just too fabulous.

The weapon, or whatever was causing the supernaturals to lose their powers/what they are, was interesting and I was curious to find out what caused it. I definitely didn’t expect it to be that when it was revealed. It gives a bit more backstory in the preternatural as well, and that was fun.

Seeing Ivy and how she moves along in life? I just laughed so hard at this girl. She is so simple, but you can’t dislike her. She is like a fluffy puppy or kitty. You just want to pat her on her head and tell her all will be well. 🙂 I do want to see the hats illustrated or made for real though, I got a pretty great image by just reading the descriptions, but it would be fun seeing someone replicate/draw them. 🙂

The romance between Ivy and a certain guy? Haha, I just loved it, but I was also giggling at the sheer drama and silliness that happened between them. I was rooting for them though, they deserve a chance at happiness.

The trip to Scotland, seeing Sidheag again? It was fabulous, I haven’t been to Scotland myself, but I could just imagine myself being there.

The revelation of the weapon/what was causing it + the battle + the end result of that was great. It was really exciting, I just flew through those pages in a flash.

I am also removing one star from the total because of the shit ending. Sorry for cursing, but really that was just crap. Seriously, they know what Alexia is, they know what she can do, why can’t they just understand such a delicate thing may also be possible? sighs But oh no, he instantly assumes, he shouts at her, gets angry at her. I was just disgusted.

Also now I know what is going on in the book…the cover makes sense. 😛

All in all, still a wonderful book, I did enjoy it a lot and I would, even with that crap ending, still recommend it to everyone.