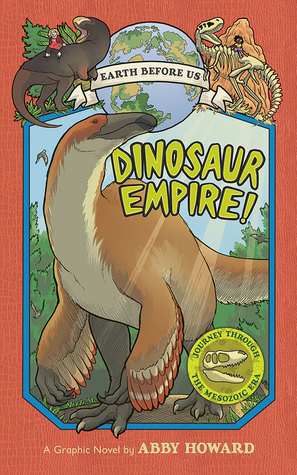 Let’s travel back in time to meet some dinosaurs, and some not dinosaurs. Find out how things evolved, how the world changed, and much more.

I just adore dinosaurs (though I must say I much prefer the creatures as they were when I was a kid, aka, big, scary, scaly and not hairy/feathery, cute, tiny, etc. (like the velociraptor for instance). It just totally destroys dinosaurs for me. I know that with each discovery I should be happy, but in fact I am getting less and less interested in dinosaurs. 🙁 ), so I just had to get this book.

Back when it was first announced I thought it would be a picture book, but later it was said it was going to be a graphic novel. Which made everything even better. Even with feathery dinosaurs, I just wanted to read this book.

A little girl (I also wonder who the hell worries about college at that age + thinking she is not going to get into it because of one zero, or is it something American?) fails her test. While walking back home she passes the house of the (in)famous Miss Lernin. The lady hears about the test, and being the dinosaur/and no-so-dinosaur expert, she invites the girl with her to a journey. And thus begins their adventure. They are of course protected (well for most) by Science Magic (which had me in stitches as it just sounds so hilarious).

I really loved both the girl and the lady. I am all with the girl on the wasp killing by the way. I would have done the same if I could. Brrr, wasps. I don’t care that they may be useful, they are generally an aggressive rotten bunch. Plus I just loved how the girl tried to smuggle all sorts of creatures with her (Sylvvviiiaaaa!). The woman sure was enthusiastic and I loved that. Those people are the best teachers.

Extra points go to providing the pronunciations of the names. Sure, it was a bit distracting at times, but I thought it was a nice touch. This way people know how to pronounce the names.

The Cool Animals From Other Times part was also a fun addition.

The art was fabulous, but then again it is Abby Howard and I just adore her artwork (another reason why I bought this book). While, again, I am not a fan of new dinosaurs (poor T-rex, poor velociraptor, poor other creatures), I still liked how Abby drew them. Plus the expressions on both the girl and the lady’s faces were often priceless and had me laughing (and cheering because of their enthusiasm).

I had a laugh at the ending: “Never fear, when next you need to unravel the mysteries of the past, I’ll be here. Except on Saturday afternoons, that’s when I have book club.” 😛

All in all, I hope that there will be more graphic novels by Abby Howard, because I want more!