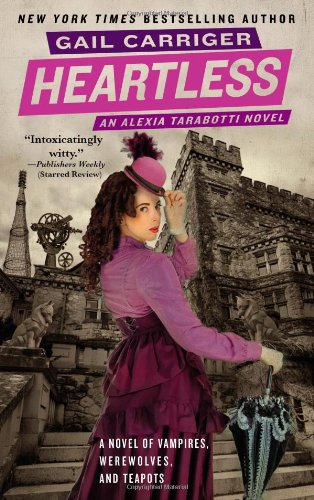 Yes, a confession, I skipped the third book. I read snippets of it so I knew vaguely what was going on. Sorry, I just couldn’t stand a whole book with possible silly/overdone drama because of what happened at the end in book 2 (which I still think was a shitty way to end a book).

Yep, in this book Alexia is fully pregnant, but of course she isn’t going to be stopped. This lady is just keeps on going. Even 8 months pregnant and she goes out to solve mysteries, go in dirigibles, do a few chases here and there. Eh, it is nothing strange for Alexia. And I love her for it. She isn’t going to let a baby stop her from doing what she wants to do. From doing her job. From nosing around. Many a pregnant lady would just sit down by this stage, take things calmly. And sure, Alexia takes some breaks, or glares at people for making the infant inconvenience move/kick/etc., but generally this girl is on the move.

Plus the pregnancy brought some hilarious scenes, like when Alexia is hungry and every vampire and werewolf near her can just whip out food out of pockets instantly. 😛

Even though of course her hubbie Conall would rather see his wife sit still for once, and is in even higher must protect mode. For which I love him even more. Sure, I still want to smack him on the head for what he said and did during the ending of book 2, but I am a pretty forgiving gal, and he does show remorse for what he did and said. He is trying to make up for everything. Protecting his wife and child even more, making sure her every whims are handled, making sure his wife is happy. He is a great guy.

The solution to the baby (since Alexia is still being followed by murderous vampires)? I definitely loved it, I was at first worried that it would mean Alexia and Conall wouldn’t be seeing the kid much, but then Alexia brought up that plan and I was squealing. It is sad that this plan had to be concocted though. I know the kid is a potential danger, but really, it is also still a kid and those do need a parents’ love when that can be provided (in this case yes). It was quite generous of Lord Akeldama to do all that for Alexia and her baby. Then again, I didn’t expect anything less for the vampire, he is so sweet and kind (though his endearing words are getting a bit cringy).

The mystery/the trouble in this book? It was quite an interesting one, as it also brought some more insight in Conall’s past (with his old pack, the assassination attempt back then, what happened after). I was already curious when some stuff was mentioned in the previous books, so I am happy that Gail Carriger continued the story in this one.

I wasn’t amused with the fact that Felicity was once again popping up a lot. I absolutely dislike that twit. She is so annoying. I definitely didn’t see that development coming though when it happened. But thinking back… it does fit her. She is the kind of person for that. I just hope she won’t pop up too much in the next book.

Ivy? I was happy to see her back, and I also loved what Alexia arranged for her (I was squealing in delight). I hope we will see more of Ivy in the next book and hopefully with some more arrangements for certain things. 😉 I was also delighted by another event in Ivy’s life. How happy I was for her and Tunstell, congrats you two!

The ending and all (really so much happened) there? Perfection. I won’t spoil anything, you will just have to read the book, but be prepared for a ride. Fasten your seat belts, grab some tissues, some fresh tea, and enjoy.

I could go on and on about this book, but I think I have said most of what I wanted. So lastly, I would definitely recommend this book (and the series).