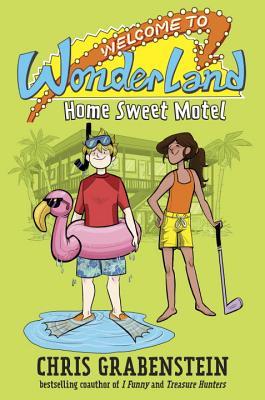 Welcome to Wonderland, where all your dreams (hopefully) come true!

Sadly, Wonderland is going to be closing down if P.T.’s mom can’t find 150k in one month of time. 🙁 And with the lack of customers it may seem that this is something that isn’t to be avoided. But not for P.T.. He loves living in Wonderland, and he is going to do everything he can, along with his new friend Gloria, to save the motel. To save his family. Luckily P.T. got the fantastic stories, and Gloria is super awesome with business (like, really brilliant) and they got some great plans concocted to make sure that the customers will keep coming. A few of their ideas: Make the waterslide (shaped like a frog) talk and perform shows, and a treasure hunt with a fun prize.
I really had great fun see P.T. with his imagination and Gloria take the more responsible stuff and form a terrific duo. Of course they are helped by P.T.’s kooky grandpa.

Of course there is drama (because of the money problems and what that brings), but there is also more! Lots of hilarious scenes for instance (duh), but also a crime! Dum dum dum! Whereas the first part of the book is mostly P.T. and Gloria trying to think up ideas, the second part is all about the crime, the mystery, and a hunt for certain lost items! It still all fitted perfectly with the story, as with those lost items and the reward our duo may just be able to really save the motel. Plus it made it all even more exciting, would they be smarter than the criminals? Would they find the missing items? And then there was a twist (though I did see it coming) which was really nicely added.

P.T. was a wonderful character, though, as more people also mentioned in the book, I hope that he won’t lose the hold on reality. His stories are fantastical, magical, awesome, and often hilarious, I am on the side of the mom. At times it seems all P.T. can do is make up stories one more fantastical and outrageous than the previous one. I can imagine that people aren’t sure any more if he is truly telling the truth, or if he is just making up things.
But his stories also grant him a way to save the motel. Thanks to his magical imaginary powers he is able to concoct some awesome ideas.
I also loved that he never gave up, even when things got really wobbly and not so fun, he kept on going.
I also felt sorry for him in regards to his dad. He kept making up fantastic stories, but the truth about his dad isn’t so fantastic. 🙁

Gloria was fantastic. When I first read about her in the book I was a bit worried. Often characters who like the stuff Gloria do are boring, bland, or bossy. But not Gloria, oh no, I quickly found out that this girl is fun, peppy, and energetic, and just like P.T., doesn’t give up on her goals. Her business ideas? Her plans? She made sure that P.T. crazy ideas were actually doable, and she also kept track of the whole thing.
The stories about her dad, the travelling, I did have to say I wanted to hug her at times, it mustn’t be easy to travel so much, to never really be able to make friends because your dad may just move again.

Then there are other characters, the mom (she was really sweet and I loved how hard she tried to do her things for the motel), the grandpa (I wish he was a bit more responsible, and maybe drank a bit less celery cola (I could even smell it after a while :P), but he was a good character, really sweet, and I loved what he made for the motel), the teacher (bleh, what a terrible terrible guy, and that is the kind of person who teaches kids… gee, how to destroy a subject for a kid, I know the same happened with me and maths), Gloria’s dad (dedicated, fun, sweet, and caring, and I did like that he kept following his dreams).

Then there are illustrations and wow, they were fantastic, Brooke Allen is really talented. Their art fitted perfectly with this story, and the characters were drawn exactly as how I would imagine them based on the written descriptions. 🙂

All in all, I want more of these characters, this motel, and so I will be buying the second book very soon. And I would recommend this book to everyone looking for a great, fun, hilarious book with great characters and dynamic illustrations.