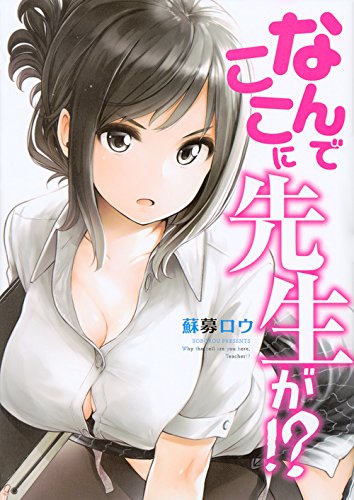 A teacher, a student, and their constant accidental meetings (plus a big dose of ecchiness).

*cough**cough*Well this manga sure escalated as it continued. 😛 From just showing some nakedness, some accidental groping, to sex.

It was still pretty good, I had quite a few laughs at what happened and it was quite magical how they always seemed to get into certain situations.

I also liked that they were connected in more than one way, not only because of the student/teacher relation, but also because the teacher knows the student’s mom closely (friends for many many years). Then there was some hilarious story when she was a teen (deciding on her college/future career) and he was almost a teen. It was a bit weird (due to what happened), but I still liked that it was added.

And it seems that his mom is totally shipping these two together. Even leaving them alone, giving subtle hints, asking her to help out with things, asking him to help her out (even though he doesn’t know). Mom also can’t deny the chemistry between these two.

Plus it is funny to see that the manga also starts the same way, just with a different setting. Some may find it boring that it starts the same all the time, but for me it added to the charm of the manga.

I am normally not a big fan of teacher x student relationships, but I couldn’t dislike it in this manga. These two are just destined to be together, fate just puts them together in so many different ways. You can’t deny fate.

Art is pretty great. I love the style. I also appreciate that, while the boobs are a bit too much at times, they did match her body. Her proportions were healthy, she has got some fat on her body. More manga/anime should do that, and not go for the super-thin big-boobed girl.

All in all, even with the maturity going up as the chapters went on, I still quite enjoyed reading this one. I would recommend this one, but be warned, it is quite ecchi and mature.