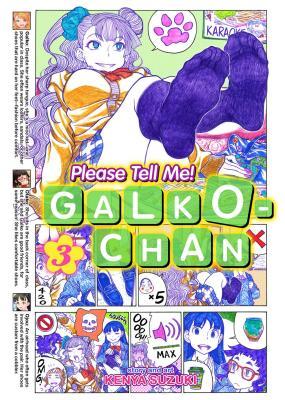 Another delightful volume in the Galko series.

It is getting less and less provocative/less sex talk, which is a bit of a shame. I just loved seeing Galko’s reactions (even though she is a gal (and often people think she is experienced), she is so pure) + to see the way people react to x question (as that is also hilarious). Plus seeing what they answer on the question. Luckily there are some lewd questions here and there, but I hope to see more next time.

The main focus of this manga was the Cultural Festival and the preparations towards making it a great one. I loved seeing what all the classes and clubs were going to do, and to see them work hard at making something fun.

I also like that we see other characters next to Galko and her friends, see their lives, worries, and families. While Galko and her friends are still the MC’s, it was fun to see her sister (please woman, don’t wear your sister’s school outfit while doing the sex act with your boyfriend), Kuroko, and various other classmates/friends.

Of course the manga is still pretty lewd at times, lots of focus on the boobs. 😛

The drama at the Cultural Festival was a bit too dumb for me, I get that they want to go out with Galko, and I get that it might suck when she doesn’t, but really? That drama? All that unnecessary crap over this? No. Ojou completely broke down because Galko was busy and just didn’t have time to be with her friends? Yes, I can imagine it isn’t really nice of Galko to just say yes to everything, but to have a breakdown because of that? And then have the others in the class help you…. whut?

This part comes from my first volume review, but it still applies:
The only thing that was a bit annoying/boring were the parts on the side of the page. Each of our characters (generally the 3 girls, but sometimes others) got a bit of an intro and what they did/wore/got with that topic/question. Why was it boring? Because it often repeated itself. At least the first part of it. Annoying? Because I would have to turn my book to read them. It distracted a bit from the topics/stories.

I am still delighted at the fact this manga is full-colour (with the exception of the last chapter which was totally green). It is so rare to see a manga using a rainbow of colours, generally they are black/white. I hope that the author can continue with this format.

All in all, I really want the next volume, I hope it will feature even more lewd/dirty questions, and I hope to see more side characters get a chance to shine.