This time Allison isn’t around, we have a new girl in town and her name is Sadie! 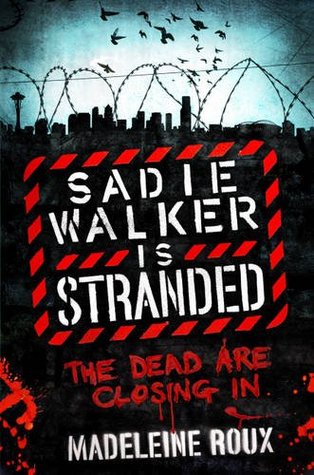 This book wasn’t as good as Allison’s, but it definitely picked up near the middle/end, and had some really great parts.

The previous book was from Allison POV and in this book that is Sadie Walker. The book still takes place in the same world as Allison’s. In fact, Sadie is a big fan of Allison. I know that throughout the book I was hoping that these two would meet. But after a while I just didn’t have the hope any more. With the way the story goes… But thankfully there is another event that does happen, that made me really happy.

Before I start with the good I have to mention the blurb. I was really excited about the blurb. Sadie goes to find her nephew who has been kidnapped (apparently there is a crazy market for orphaned kids), and I found myself eager to read the book to see her traverse this dangerous world full of zombies and crazies to find her nephew. Sadly, and I don’t consider this a spoiler (since it happens so early on), the whole kidnapping thing is done with a wheeze or a sneeze. The book starts off calmly (well as calm as one can get), then the action starts, and at page 25…. the kidnapping is over. Yep, page 25 of 343-ish pages! Isn’t that absolutely fucking amazing? So I am removing -0.5 stars from the total because of this. Can’t people just write a good blurb for once?

Because the rest of the book is about her fleeing, landing on a creep-fest of an island, some romance (because why the heck not), a lot of creepiness, of course our friends the zombies are also there (did you know they can swim? NOPENOPENOPENOPE!

). I loved how the normal days got sliced in pieces by death, by zombies, by something far more evil than zombies lurking in the darkness. This may sound weird, but I loved how there were normal days, just filled with eating, foraging, some happy things, something to counter all the death normally so prevalent in this world.

Yep, our group has bigger problems this time. Not only are there zombies, and they can swim (thus an island isn’t safe any more), but we have something eviler. It is a typical trope in zombie books. You shouldn’t always fear the zombies, humans are generally worse. Trust is something you don’t give to everyone. I am glad that the author added a big villain, it gave the book even more creepiness. Who the villain was? Mm, I have to say I kept guessing until the end. I had some suspicions, but with the world being as it is… anyone could have suffered a too big of a trauma and ended up craycray.

The reveal was done really well, and I was oooohhiinng and screaming at our crew to just effing run away. And fast.

The romance? Eh, I wasn’t that happy at times. But then again, I am not a big fan of love triangles. And we do have one in this book. Moritz > Sadie < Whelan. Of course you could quickly see who would be the true couple, and I was happy with who that turned out to be. They are the best match with Sadie! Though I didn’t like how they first attracted the attention of Sadie (really, that was just stupid).

Sadie… mm, it took me a while to like her. She has a big attitude and an even bigger mouth. Makes some stupid horror cliche decisions, judges people very harsh (for just having big breasts and juicy on their ass for example). But she is also a great aunt (at least she tries), she can draw (I wish we could have seen some pictures), and she won’t give up even when faced with some pretty shitty things.

Sadie’s best friend, and also Whelan’s best friend? I loved both of them. They were just too awesome. I wouldn’t mind a book from their POV.

Also, like any zombie book, don’t get too attached to characters.

All in all, definitely still a book that I enjoyed, and that I hope to read again one day (maybe in combination of a re-read of Allison’s book). And I hope that we will have another book in this series one day.