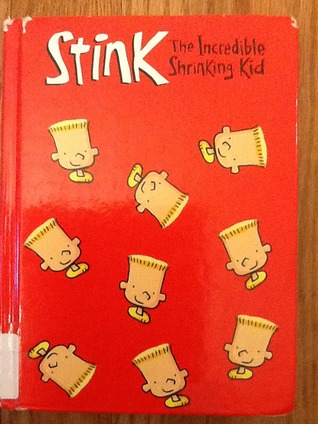 A brand-new (for me) Stink story! With a lot of shrinking, newts, and presidents!

Imagine my surprise when I visited Library #1 and saw this book! I never expected to see this series there and in English even! So of course I had to bring it with me.

In this book Stink feels like he is shrinking. He is the tiniest in his class, his sister (who is also way older than him, but he seems to forget that) is bigger, and all he wants is to grow, grow and grow! Throughout this book we see him struggle with growing, and shrinking (as he thinks that is what happens).

Plus I could kind of understand his frustration. I am also not the tallest, never been that, so I can imagine the desire to grow (though unlike Stink I can’t grow any more). I vaguely can remember that I also wanted to be taller when I was Stink’s age. 😛

But next to the fact Stink wants to grow up we also have a pet newt (from Newt Hampshire) and all that happens to that little guy (which had me in tears for two reasons, if you read the book you will get which reasons).

And we have presidents, especially one in particular, namely James Madison. Who also wasn’t that big, and who shared a name with Stink (Stink’s normal name is James). I loved what Stink tried to do and the answer he got back was fun and great. Happy to see them replying to kids.

Of course there is lot of Judy and her antics. In this one she paints her poor brother’s hair orange. 😛

And like all the other books this one has a bunch of illustrations to make the story even more fun (though I did think that Stink seemed taller than he seemingly was).

All in all, I hope to one day read more about Stink, his adventures, his daily life. Crossing fingers that Library #1 will be getting more of these (but then again they are limiting/shrinking… RIP YA section). I would recommend this book (and of course the Judy Moody series).