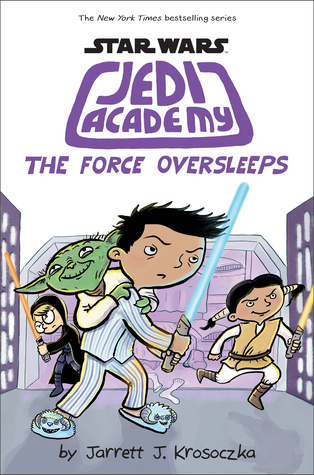 The second book with the new character Victor, and this time we have a temptation by the Dark Side, waking up isn’t the easiest, jealousy (not a quality that fits with a Jedi in training), sister problems, and much more.

I have to say that Victor just seemed to have forgotten all he learned in the previous book. He was right back in the same place as the last time. He is arrogant. As soon as he learns that his new impressed friend is already friends with everyone, and is as good as he is in many things, he get jealous and quite rude. He once again stresses about school, and doesn’t talk to anyone about it. And I could go on. He became better, like the previous book, as the story progresses. But really, is this going to be a trend for each book? We still have at least one year to go, and sorry, if he is going to act crappy again in the next book… I am not sure if I will read it.

I loved the whole sister drama/mystery that was going on in this book. I won’t spoil much, but as I read I just couldn’t imagine her going to the Dark Side. I was worried, but also thought there may be more to it. Again, she is just too good. I am sure nothing can sway her from that. I loved when everything came together in a great conclusion.

It was quite fun to see Victor get all excited about one thing and then not think of anything else. 😛 Poor mom, poor sister, poor stepdad. I can imagine that they have gone a bit crazy from his constant chatting about the topic. But I quite like it. I know the feeling of having something so awesome that you want to share everything you know with everyone around you.

We also have a new girl, Elara, and I just adored her from the start. She was a bit stalkerish, but she was also sweet, and I was just rooting for her feelings to be accepted by Victor (who after all should just give up on that other girl, she clearly has no feelings for him/isn’t interested in him beyond friendship (ooohhh friendzoned :P)). I loved how supportive she was of Victor.

Of course, like all the other books, this book is full with Stargrams (Instagram) pictures, illustrations, comics, newspapers, the comics in the newspapers (again, same problems I had like last time, they were just a bit too much of a copy/paste from the original ones only now with Star Wars characters), lesson plans, and much much more. It made the book really fun to read. You just can’t stop reading, you want to know what is on the next page, and the one after that, etc.. 🙂

The new character? Probably due to how Victor viewed him, and we are reading from his POV, I just couldn’t like the guy. He just seemed to be trying a bit too hard, plus I found it a bit too easy how he came into their group. I know that a few of them knew him, but they just accepted him without seeing if everyone felt OK with it. Also was it really needed to make him that much of a clone of Victor?

Also am I the only one? But Yoda looks positively creepy on this cover.

Well I hope that in the next book Victor will retain what he learned in this book, and not have a magical case of amnesia. 😐 I am also curious what the next book will bring, and what the title of the book will be.

All in all, I would still recommend this book to everyone