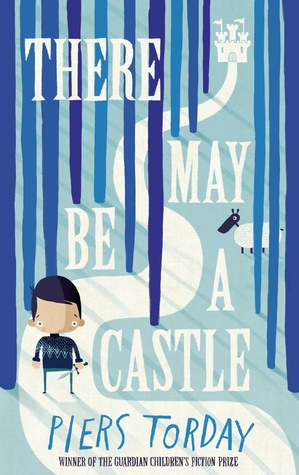 ‘Is there a castle?’ he asked.
The horse seemed to flinch underneath him, as if he had wounded her. She sighed, her head sank low and then with a snort she straightened up again, although her voice wavered.
‘There may be, little knight,’ said Nonky. ‘There may be a castle.’

So yesterday night I had about 1 hour and 20 minutes to read before I wanted to sleep, and I managed to read 220 pages, sadly I was too tired to read further, so I had to wait until now before I could find out the outcome, the last part. Would Mouse make it?

And now I am going to try to write a review, though bear with me, it may be chaotic.

Before I start to talk about the awesomeness of this book, I want to say I am giving the book -1 star. This could have been a wonderful, special, epic book, I wanted to rate it 5 stars, maybe even 5+ stars, but then the author added Violet’s POV. Violet, the sister. Whose POV I did like when she was still in the car, but when she started to dismiss Mouse and his journey, even scoffing the fact he did x and not y, and just took the journey sans mystical stuff herself? It just felt like Mouse’s journey was worth less. Here look at this sister, she can do it without going into a mystical world bordering on death and life, she will be the one to solve everything, look at how fast she is doing things that took her brother a whole day if not more. That is how it felt to me. With each POV of Violet I grew increasingly frustrating at her attitude and her butting in. I wanted Mouse’s journey. So Violet, please stay in the car and don’t move. Thanks and bye.

One other thing that was a bit eh was: The accident? I just felt so sorry for the mom, for Esme, Violet, and Mouse, though I did think it was a bit too irresponsible to go outside. Sorry, I know, not really the right thing to say, but I just couldn’t help thinking that it was a bad idea. There is tons of snow, hidden ice patches, and who knows what else. Still no one deserves an accident, but I just can’t help but shaking my head at people going outside in dangerous conditions. Especially if you have kids with you. Don’t do it! Just go another day, I am sure the grandparents could understand.

Now back to the story, it broke my heart many times. I just knew what was going on with Mouse’s journey, I just knew what all those things he encountered meant. I just knew! And it broke my heart. But I noticed that I was still hoping for another outcome. I was sure he would make it! He would find help! He would be the one saving everyone. He would grow up! He would be great! I was rooting for this little boy the entire time. Sometimes acting like Nonky did (yep, including her attitude :P). Telling the kid to not look behind him, to not fall asleep, to not waver. To continue with his journey. Cheering him on.

Mouse was a great character, I didn’t entirely like him during some parts of the book (with how he acted), but mostly I just liked the little guy.

I also loved Nonky (such a character that girl, I loved her attitude), Trex (though his speech stuff was a bit hard to understand), Bar (such a cute sheep + I loved that she never left Mouse, she always stayed close by. Plus that fart :P). I didn’t quite like the Jester (due to what he did in the beginning + his songs were annoying).

The journey was a wonderful one, the author sure wrote an engaging story. I was thinking this would just be old-fashioned fantasy (given the blurb stating that Mouse wakes up in a magical world), but it was so much more. It was so different from what the blurb states. From the start I knew that this was not some ordinary fantasy world, but something much more real. It still held all the elements of fantasy (talking animals, magic, evil knights, etc.) but… nah, I won’t say more. You will just have to read it to find out what is going on.

The ending to the book? Dang. Thanks author for making me cry. Thanks for breaking my heart. I am glad though that the author didn’t shy away from making this ending. Yes, it was a heartbreaking ending, but I feel that another outcome wouldn’t have fitted. It wouldn’t have been right. The epilogue was a really good touch and nice addition.

Also pay close attention to the little chapter images! I loved that little detail when I spotted what was going on.

All in all, I would highly recommend this book to everyone. Bring tissues though and grab some glue, your heart is going to need it.

But without Violet…. it would have been