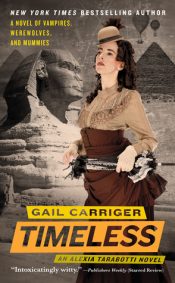 sighsThe last book in the Parasol Protectorate. Boy, I will be missing this series a whole lot, the characters, the world (though thankfully Gail Carriger is still writing books in this world). I hope that we will still see Lord and Lady Maccon in other books, or Biffy and Lyall.

This book has a time skip of two years. Prudence is now a precocious little toddler, and just when everyone thinks it is time for some peace and quiet, Sidheag pops up, there is werewolf trouble. And if it can’t get even more complicated Alexia gets an invite from the vampire queen in Egypt to visit her, and of course bring Prudence. One can’t just say no to a vampire queen, so they have to pack up.

And so the book is split up in two parts. Alexia, her hubbie and kid, and her friend Ivy and her hubbie and kids and their theatre troupe are going to Egypt (they need some sort of excuse why they are leaving London, and what better way than to have the theatre troupe go on a tour in Egypt). While Lyall and Biffy stay at home and figure out things from their home + make sure Sidheag isn’t doing anything that may bring trouble. I loved both of these POVs. Biffy and Lyall’s because I have been shipping them for a while and I just wanted to see them get together. And Alexia’s POV because well first of all Alexia, but second Egypt! My favourite country in the world, I still hope to one day visit it.

Of course like the other books there is some silly drama, and I disliked the way it was solved. The drama involves something that Alexia kept from her hubbie, namely what happened so many years ago to his old pack. I am still doubting if it was a good idea to hold it from him, but then again… I can also so see why she never told him. My lord, Lord Maccon is such a drama queen at times. Instead of just talking it over he gets super-angry and then just leaves. Whut?

We also find out more about Alexia’s dad (a real mess that guy was), about the Plague and why it is spreading (it was quite interesting to read when they found out what was causing it/how it was spreading). Plus we see a new queen and learn a whole lot about her (poor thing, I can imagine she may want to see Alexia and her kid). Of course there are also enough other exiting things happening. This whole book will keep you on your toes, well, sometimes also throwing you off your toes when you laugh at some of the things that happen (like that show by Ivy, her hubbie, and their theatre troupe). 😛

I am also happy to read that Ivy has twins now. Congrats! With of course names typical for Ivy and her hubbie. 😛

The ending was fabulous, I was really happy with how everything turned out, it was a bit of a drastic solution, but I think it worked wonders. Even if it means a lot of adapting for all parties involved.
Plus with certain things said, I was just awwing and cheering. That was so sweet of Conall. I was already thinking he may just do that, considering how much he loves Alexia.

Yep, I really enjoyed reading these books. Great characters, wonderful story. Definitely would recommend the series to everyone.