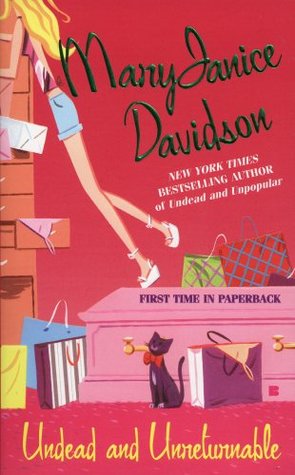 The fourth book! Christmas, a wedding is coming up, and a serial killer?

And yeah, I haven’t read book 2 and 3 due to it being out of stock on Amazon. I still want to read those books, so I have got them ordered from Bookdepository (I gave up waiting on Amazon).

A lot of things seemingly happened between the first book and this book. It seems that Betsy went full-on evil (I so want to see that), she found a sister (who is apparently also supernatural, child of the devil), and she did a ton of other things. While I was a bit confused at times, I did get into the book just fine, sure, I had questions, but it didn’t hinder my reading that much.

Betsy was once again a super girl, she was fun, hilarious, but boy, she needs to learn to talk a bit more with Sinclair. Not saying anything about THAT… may not have been the wisest move. Or the moving of the wedding date. Or the fact she just allowed a vampire guy who is interested in her in her home to stay for a while (gee, what did you think Sinclair, your lover and fiance would say of that). Or well the fact she allowed her life story to be written down… Yep, she makes some really bad decisions in this one. But I just couldn’t help liking her. As she did a whole lot of good things. Like helping out ghosties (apparently our girl can now see and talk to ghosts), hunting for a serial killer (oh my), helping out one of the fiends who is now more human, writing columns for a vampire newsletter, and of course setting up a Christmas tree in a house with vampires (what could possibly go wrong?).
Plus her snark and the fact she will just sprout out anything without thinking. At times it was a bit too much (disrespectful), but mostly I was laughing a lot.

Sinclair however took a turn for the worse. He was super-insecure in this whole book. Being mean towards Betsy. Instead of just talking it over, or explaining things, no, no he had to do some hissy fits and days full of pouting. sighs I just wanted to smack him. She loves you, she wants you, she choose you. Yes, she makes some stupid decisions, but I would think you know this by now. And yes, that book says x, but really, with how things are going at the moment, don’t you think you are overthinking this a bit too much? So yeah, hot, sexy, snarky Sinclair was replaced by grumpysinclairkins. Eventually things settled, and I did love how he always came to Betsy’s rescue (even if she may not always like it).

The serial killer was a nice addition to the book, not saying that I approve of serial killers, but eh, you get what I mean. Well I hope. 😛 It was quite exciting, intriguing, and I was eager to see what Betsy (and her sister) would be doing to stop the serial killer.

I didn’t always like the sister, she was quite nice at times, but I found her a bit too cocky, and I didn’t like what she did near the end. I know you have issues, but hit a wall, or do something else. This isn’t what you want. You are just endangering others now.

Jessica and her romance? He he, I was definitely not expecting it, but I have to say I had no problems with it. If anything I was delighted that Jessica would also finally have someone. 🙂

Of course, even with the fact that Sinclair was such a grumpysinclairkins, we still have some very steamy sex scenes.

The ending was great, though I am sure certain things that happened will be coming back in the next books. I can’t wait!

All in all, I need more of this series. It is funny, sexy, a bit steamy at times, features fabulous characters, and much more.