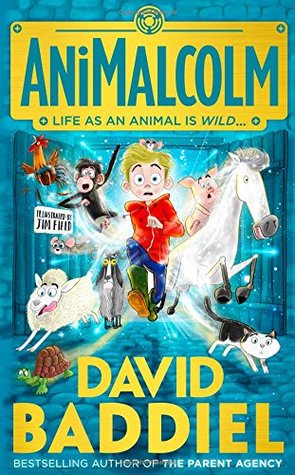 David Baddiel did it again, he wrote another magical book.

This time no Parent Agencies, no Controllers that will control people/animals, oh no, this time we are experiencing what it is like to be an animal, and not just one, but quite a few of them.

Say hello to Malcolm, he is our MC, and he doesn’t like animals. He has his reasons, and I was nodding along, I could totally understand he may not be all that happy with animals. I understood his point that animals seemingly do nothing all day, just laze around, or do some weird animal thing. Of course, I am an animal fan myself, but I could still understand Malcolm’s reasoning.
Malcolm is about to go a school trip (something he should be quite happy about as his parents really scraped together the money, but I can imagine that no boy is all too happy to have to spend days on a farm with stinky goat cheese), and on that trip he is going to discover that being an animal is more than it seems.
Malcolm is a pretty fun character and I loved that he just wanted to know why he was alone in not liking animals, he kept pondering why everyone was loving it, yet he couldn’t understand that love.
Throughout the book you also see him change as he understands more and more about animals, as he makes friends with them, as he hears their stories, as he sees just what they do for him.
I was also a bit worried about him near the end.

Because Malcolm is going to meet a goat that is very old, and may just be able to do magical things that will turn worlds upside down.

And thus enter the animals, and the transformation. Most of the book take place on the farm, and we see Malcolm make friends, transform in another animal, find out about what happened to him, and also has a jolly good time as he discovers that being an animal can be quite fun and delightful. A whole world opens up to him, and I laughed quite hard that he had to keep repeating the story over and over again, and had to ask for witnesses (the animals he was previous with).

The curse/spell? I had a laugh at what it entails. Dear heavens. You just have to hope you get the right animal then. 😛

Later on the book gets even more excited as a race against time starts and Malcolm has to ask all his friends to help him out.

The ending was fabulous, and I was really happy, though I was a bit surprised that people fell for that excuse so easily, I wouldn’t have bought it, oh no, not at all, even if I was delighted at seeing my kid again. Plus I loved those last pages, that poor teacher, though I am sure he is happier now.

It was also fun to see Fred, Ellie, and Barry again!

Almost all of the book is from Malcolm’s POV, but we also see his Mum and the teacher’s POV, I quite liked that those POVs were also added.

The book is also heavily illustrated and I just adored each and every illustration. They made the book really pop and made some of the scenes even more hilarious.

The only two things I didn’t like, and they were things I also didn’t particularly liked in his other books were the fact that the adults were just idiots or just should be shaken a bit harder to get some sense in them. The teacher? He never noticed that Malcolm was missing. The parents? How horrible that they would laugh over that event when they know Malcolm is around. Plus the fact they totally didn’t give a poop about his feelings on animals and that they should just have gone for another present. Basing all the presents on that one thing? Also not right. I feel that they should learn a bit more respect.

All in all though, I really liked this book, and I can’t wait to see what David Baddiel will think up next. I would recommend this book to everyone who is need for a funny, animaltastic, magical book.