Welcome to the Blog Tour for Jonathan Stroud’s newest book (and fifth book in the Lockwood series) The Empty Grave!

When I received the news that I was accepted as host, well, I can tell you that a lot of people heard my fangirl screams. 😛 And it wasn’t even day, so um, oops.  I am a giant fan of the Lockwood series, and I can’t wait to see what Jonathan Stroud will be revealing in this book. Squee! Tomorrow the book will come out (though I have to wait a bit longer as my pre-order is of another edition (the green cover + paperback)), and the book is published by Disney Hyperion.

So, for today’s post I got various fun things. Of course the standard information (book/author), but also an excerpt which makes you want to read the whole book, and also a giveaway to win 3 copies of the book (sorry, US only). 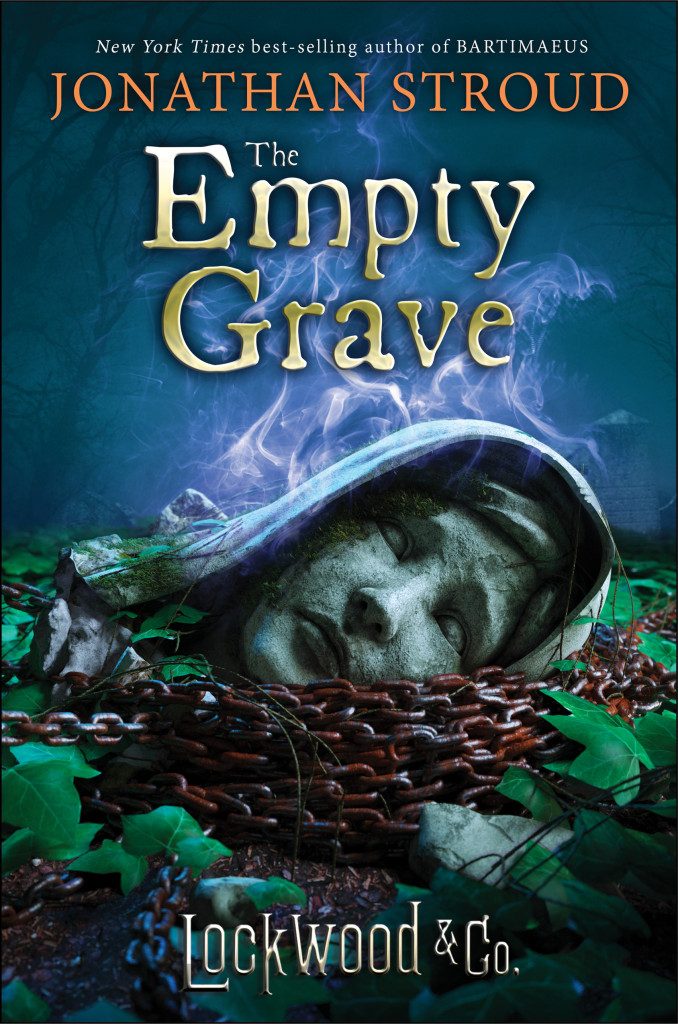 After the dramatic events of The Creeping Shadow, the Lockwood team (plus Quill Kipps) deserve some well-earned rest.

So naturally they break into the Fittes Mausoleum, on a perilous mission to discover the truth about London’s top ghost-hunting agency, and its sinister leader.

What they discover will change everything.

But there’s little time to ponder. A near-miss at a haunted fairground is only the start – as the Fittes agency closes in on the team, an epic struggle commences.

With the help of some unexpected, and rather ghostly, allies, Lockwood & Co must battle their greatest enemy yet, as they move ever closer to the moment when the earth-shattering secret of ‘the problem’ will finally be revealed.

Jonathan Stroud once again delivers a rousing adventure full of danger, laughs, twists, and frights. The revelations will send readers back to Book 1 to start the series all over again.

Jonathan Anthony Stroud is an author of fantasy books, mainly for children and youths.
Stroud grew up in St Albans where he enjoyed reading books, drawing pictures, and writing stories. Between the ages seven and nine he was often ill, so he spent most of his days in the hospital or in his bed at home. To escape boredom he would occupy himself with books and stories. After he completed his studies of English literature at the University of York, he worked in London as an editor for the Walker Books store. He worked with different types of books there and this soon led to the writing of his own books. During the 1990s, he started publishing his own works and quickly gained success.
In May 1999, Stroud published his first children’s novel, Buried Fire, which was the first of a line of fantasy/mythology children’s books.
Among his most prominent works are the bestselling Bartimaeus Trilogy. A special feature of these novels compared to others of their genre is that Stroud examines the stereotypes and ethics of the magician class and the enslaved demons. This is done by examining the perspective of the sarcastic and slightly egomaniacal djinni Bartimaeus. The books in this series are The Amulet of Samarkand, The Golem’s Eye, and Ptolemy’s Gate, his first books to be published in the United States.
Stroud lives in St Albans, Hertfordshire, with his two children, Isabelle and Arthur, and his wife Gina, an illustrator of children’s books.

Excerpt time! Now I want to read the book even more! 🙂

Lockwood did a sort of reverse swivel. Now he was facing George. “Hold it,” he said. “What traps are these?”

“Yes. I’m quite interested in this, too,” Holly said.

We all were. We gathered around George, who did something with his shoulders that was probably meant to be a casual shrug. “Oh, it’s just silly rumors,” he said. “Frankly, I’m surprised you’re interested. Some say Marissa didn’t want grave robbers interfering with her tomb, so she took precautions.” He paused. “Some say these precautions might be . . . supernatural ones.”

“Now you tell us,” Holly said.

“When was this little fact going to be mentioned?” I demanded. “When a Specter put its fingers around my neck?”

George made an impatient gesture. “It’s probably nonsense. Besides, it would have been a distraction earlier. It’s my job to distinguish between solid fact and rumor.”

“No, that’s my job,” Lockwood said. “Your job is to tell me everything so I can make the judgment.”

There was a heavy pause. “Do you always argue like this?” Kipps asked.

Lockwood gave a bland smile. “Usually. I sometimes think incessant bickering is the oil that lubricates our efficient machine.”

George looked up. “You reckon?”

“Oh, for heaven’s sake, are you going to bait me on that as well?”

“I thought you liked some bickering! You just said—”

“I don’t like anything that much! Now, can everyone please shut up?” Lockwood gazed around at us. His dark eyes locked on ours, holding our attention, steadying our collective purpose. “Traps or no traps,” he said, “we can handle this. We have two hours to check the tomb, close it up, and be ready to go when the sentries change again. Do we want to learn the truth about Penelope Fittes and Marissa? Of course we do! We’ve worked wonders to get here, and we won’t panic now. If we’re right, there won’t be anything to worry about. If we’re wrong, we deal with it, as we always do.” He smiled. “But we won’t be wrong. We’re on the verge of something big here. It’s going to be good!”

Kipps adjusted his goggles dolefully. “Since when has anything good happened in a crypt? It’s going to be bad by definition.”

But Lockwood was already heading down the stairs. Beyond him, light flickered on the iron face. Its thin lips seemed to smile as we descended into the dark.