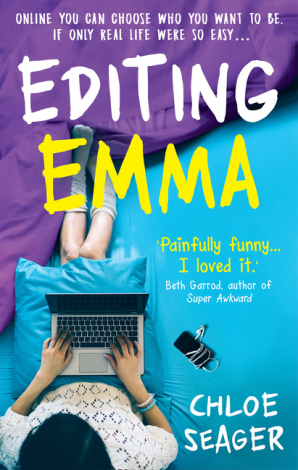 I am still not sure what to rate this… on the one hand this was hilarious, fun, and quite awkward.. But on the other hand I wanted to whack Emma a lot of times, her obsession with Leon was creepy and dumb, she treated people like shit (like Greg or Laurence, then again not too caring about Laurence, more soon), she acted like she was all that (no you are not). So I am going for 2.5 stars.

This review will be a bit chaotic.

At first it was quite sad to see Emma be so destroyed over a short relationship, it was all dramatic, but quickly I just got bored. And annoyed. The guy broke up with you (in a bad way, but well, still broke up), and you keep on stalking him, and his new girlfriend all the TIME. Like, she stalks more than she breathes. I kept wondering why her friends were still with her. If my best friend would just keep on talking and talking and talking about her ex… I would talk to her and tell her to stop. It is over, really. Stop.
And then when she is going on dates with other people she is just thinking about Leon, and that made me hate Emma. I get that it is hard to get over him, but this is just rude and mean.

And I just was rolling my eyes and wondering if this girl had a brain during the part when she was grounded and her internet (phone/laptop) was taken away from her. She went total drama queen, even walking away and not caring if she would get hit by a car. What the actual hell. Oh, boohoo, you lose your internet, oh boohoo you can’t stalk people now, how terrible. Your life must suck so utterly much. rolles eyes some more

Same goes when she was with Greg. She didn’t want to be with him. Every time he wanted to kiss she wanted to duck. He wanted to go further and instead of saying no, or talking it over, she just did stupid things. I just felt so sorry for Greg, he really liked Emma, and she treats him like crap. Like a science experiment.

Laurence, guy, really, you went on ONE date with Emma and you think that equals as a start of a relationship? You didn’t even ask her about it, you just got angry at her. Which is just awkward. Are you going to do that to every girl you go on a date on? Oh, we have done one date now we are together for ever and ever? Whut?

Leon, bleh, I hate guys that treat girls like poop, I just couldn’t see the attraction between Leon and Emma. Maybe because we don’t see them together, just in flashbacks, but I just felt he was a bit of a player.

The thing that girl did near the end? Wow. I already didn’t like her that much, but this was definitely the final straw into putting her into the same list with Leon.

Plus the ending just felt really fake. Sorry, but after all the stuff in this book, I can’t believe that will ever work out. Sorry, if I am mean, but Emma just isn’t the brightest light bulb.

Other good parts include the times when Emma was sewing clothes (she is getting quite good at it), when she was with her friends (and not talking about Leon), I liked the fact this book was written as posts/updates on a blog/online diary, I loved Greg, Steph was fun (though also weird, but in a good way), Faith was sweet (and I hope that one day she can tell her parents about her being a lesbian without them given her too much hurt for it), several of Emma’s antics were quite fun (I had such a laugh when she send the blown-out screenshot to the boy in question or when she met with PAOLO), reading about the things she does in school was interesting (had a laugh at the biology lesson with that heart), for some reason I couldn’t stop reading (I had to know if Emma would get a brain, plus I wanted to see how much more she would wreck things around her). So yeah, there is good in this book, but sadly most of Emma’s behaviour ruined the book for me.

Would I still recommend this book? I am not sure. As I said it had lots of good moments, but be warned of Emma.