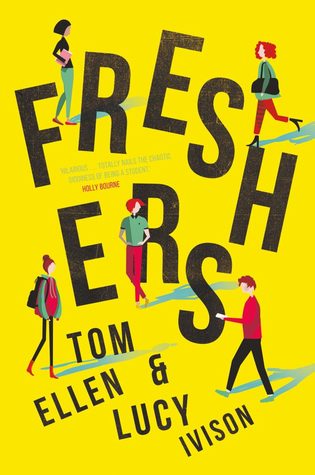 A new book by the power duo Tom Ellen and Lucy Ivison! Yeah, I would call them that, as I love their books more and more with each new book. 🙂

This one was an absolute delight. We see the first term of the first year of university through the eyes of Will and Phoebe. We see parties, see them struggle with living alone (missing friends and family), see them figure out what to do with life, we see them have fun, we see romances and flings bloom, and so much more.

Phoebe was my absolute favourite character. She was fun, interesting, and her love life… well… I am totally agreeing with everyone in her hall about it. She sure has no boring love life. First Will, and then Luke, and then the troubles with both of them.
I loved the fact she took English, it just fitted her so perfectly, though I had hoped to see her reading a bit more. But then again, with everything going on I can imagine she may not have time for reading. 😛 Her life is already one from the books.
She was also strong, and didn’t waver about her feelings (like at the end). Her friendship with Negin, Liberty, Frankie, Becky? I loved it, I am sure a lot of people would wish they had such tight friendship from the start. Often it is hard to make new friends, but Phoebe did it. Plus I loved to see them together. You wouldn’t think these girls just met, it felt to me like these girls were together for a long time.

Luke.. well, I didn’t particularly like him. There were times that he showed that he had some brains and that he had a good personality underneath everything, but generally I just wanted to chuck him in the pond. The whole thing with Abbey? He should have been clear from the start, no wishy-washy stuff like what happens throughout the book. You can’t just like Phoebe, but also like Abbey. You have to decide. And then there were countless of other times he just royally screwed up. Lying about the walls, going along with Will and his crap. He really needs to get his stuff together and do something productive. Less drinking, less stupidity.
I also didn’t like how he just BAM liked Phoebe because she sent that text to him. He has never seen her in all those years, never really looked at her, but because of that text he suddenly was interested. I found it weak.

I would also have loved to see Negin, Frankie, Josh, or Liberty getting a POV along with Phoebe and Luke.. They are all such interesting characters, and I want to see more of them. I want to see how their first term was (and not from the POV of Phoebe).

I was also happy to see Flora appear. Until then we mostly saw her text messages, so it was a delight to actually see the best friend pop up.

Will was a horrendous character. I didn’t like him from the start and I was already shouting at Phoebe to NOT do it. Don’t go with him! Don’t do it! Even after all that stuff that happens he washed his hands in innocence, acting as if it was just a big joke and that people should liven up a bit. That is not how it works. You post private photographs of people, you let people post shitty comments about it. That is not a joke. That is just terrible. It was sad that he never really got a clue. He thought he could just do whatever he want.

So, I now want to talk about my OTP for this book, and that is Josh x Phoebe. Josh was just so cute, so sweet, and so caring. He was so different from Luke, and unlike Luke he had his shit together. He cared about Phoebe, and though Phoebe was pretty much oblivious to it all (she had Luke on her mind), I was hoping these two would get together. They would make an adorable couple.

I loved reading about the first term, about the freshers week, about the parties, about living in a dorm, about the lectures and see what kind of things they had to do as homework (mostly essays and reading it seems). The authors both wrote the place so well that I could just envision myself walking alongside with Phoebe or her friends across the campus, into the village.

The ending was one I dreaded. Would the authors do the standard YA thing and bring Phoebe and Luke together even though they totally didn’t match and had so many problems?


There was just one thing that had me confused, or well two things. Things like sat, I barely ever see people use sat instead of sitting. And there were other verbs that just went weird for me.
Also, some hilarity, it took me some time to understand that pissed was drunk, I thought they were angry as that is what I generally see the word being used for. 😛

Oh and my favourite scene that had me in stitches was the one with Phoebe and that certain thing up in her vagina. Poor thing, how does she do it?

All in all, a wonderful book with serious things, but also with parties, love drama, friendship, and much more.