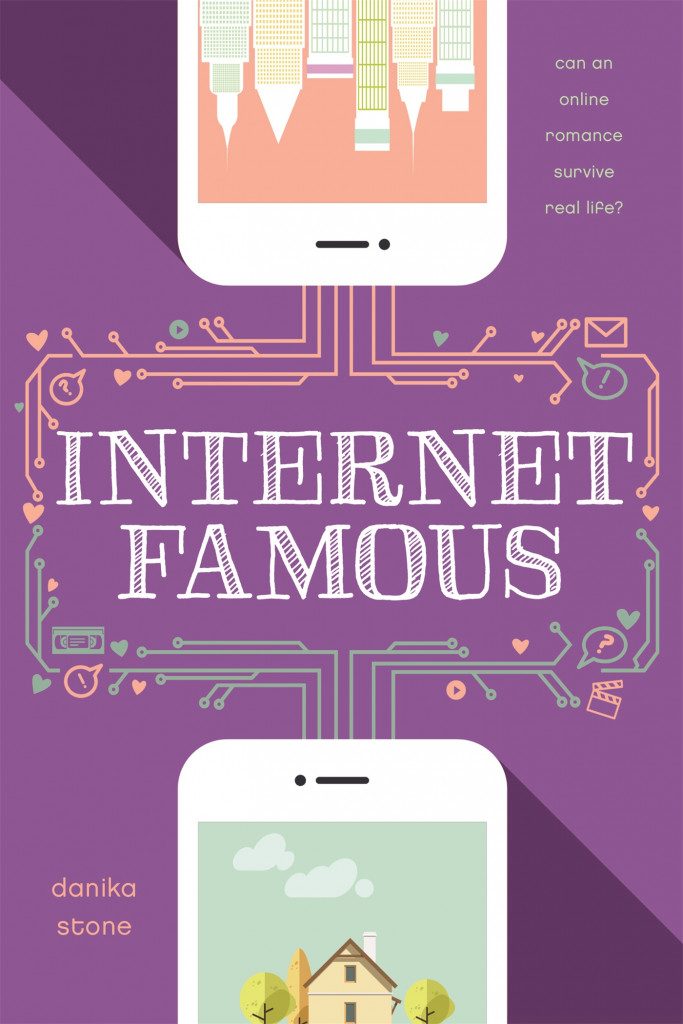 My second Danika Stone book, and I loved it just as much as I did her first book!

Meet MadLibs, or Madi. She has a blog were she reviews movies, comics, books, anything. She live-blogs/tweets while watching. She has a ton of followers and she even has a group of fans who support her in a whole lot of things. I wish I could see Madi’s blog in real life, it sounds like the blog I would love to follow and read. Yes, I confess, I would be a Madlibber.
Her dedication to the blog was amazing. And she had such good ideas to keep it running, to make everything even more interesting. I was a bit put-off by her constant begging for money though. But maybe that is just me, I can imagine she may need money, but it just felt weird to ask it from people who follow you.

I instantly liked Madi. She just had that charm, plus her personality is quite close to mine.
It was also fun that she did online classes instead of going to school. I wish I could have done that back in the day, I am sure I would have been much happier and gotten higher grades. She has her reasons for doing those online classes, we find those out as the story progresses.
Plus this way she could do more for her blog + take care of her sister (pick her up/bring her to school/other events).

I loved the romance between Madi and Laurent, even though I hate the name Laurent. (Sorry, bad experiences with people called either Laurent or Laurens. The name is cursed to me.) They were just perfect together. I am normally not a too big fan of instalove, and it definitely had hints of that (considering the almost wanted to kiss at the first time they met and some other things), but I could forgive these two. The sparks between them were obvious. Laurent was sweet and supportive of Madi. He protected her and tried to help her with the troll. When she gets in trouble with school work he offers to help her out, spurring ideas on what to do, and much more. Plus he always listened to her when she had her problems at home. And the same goes for Madi, she is there for him when he needs her.

The troll situation? It was all very exciting, frustrating, and scary, but I was also very angry at the troll. Especially later when we find out the who’s and the why’s. Then I just wanted to throttle someone.
Because to harm someone, to hurt them, to go out in full force to destroy their lives, their everything? Sorry, but I was just disgusted. That someone would go that far.
It was quite interesting though as I kept trying to figure out who it could be. I had a few suspects, and I can also imagine why Madi thought it was that person at first. Not really the brightest choice maybe, but I don’t blame her for thinking that.

I loved that the book had texts, photographs, tweets, comments, and blog posts. It really made the book even more engaging to read.

This is probably going to be an unpopular opinion, but I disliked Madi’s sister. At times she was a sweetheart and I quite liked her, but most of the times… no. I get that she has problems, she lives on schedules and everything needs to go by the book, but really, she just annoyed me. How she couldn’t get the simplest things, but then the next moment could. She made a big deal every time her sister wanted to go out, while her sister kept telling her she would come back, and that her sister could text/message/call her any time if she wants.
It also doesn’t help the fact that Madi is the go-to person if something is up with Sarah. The parents let her do all the things. At times it just felt like Madi was more like a mom instead of a big sis. Oh Sarah has a tantrum, Madi dear, please solve it for us because we can’t do that.

As for the parents. The dad was terrific, well, for most of the book, at times he made some decisions I wasn’t happy about, but in general he tried to make things work. Plus he also showed that he wasn’t all too amused by the fact his wife was running off again to do things. He could understand it, but he didn’t agree. Then there were times that he pissed me off. The first time when Madi was told about her blog not qualifying, but later on even he could see that it was not his daughter’s fault. And it was fun, and great, to see him fight for her. Pulling out everything he could to make things right again. Go dad!

The mom however? Sorry, no. I just didn’t like her at all. She expected everyone to just be happy and cheerful that she was leaving again. Her reactions on Madi or Sarah were just ridiculous. So your daughter getting angry at you is just her being dramatic and exaggerating? What? Woman, please! Anyone would act like this when their mom would leave. Especially if it has happened before. The mom truly can’t see what it does to her family. How it effects them.

The school, especially that new lady working there? Sorry, but I just didn’t like her from the start. Hunting the rules, enforcing them with everything she could. Taking anonymous calls seriously. And especially that second call and her reaction to it. I was just rolling my eyes, and I nodded along as even the dad got angry at this person for doing this and not thinking it through. How did you really think she could have done that assignment? By magic? sighs

The ending was so sweet, and I cried. Yes, I did. I just teared up at those last pages. I am so happy for both of them, this is the ending they deserve!

Oh plus, I want to give extra points to the cover. I already loved it when I hadn’t read the book, but now that I read the book and the cover makes sense? I love it more! It fits perfectly with the book.

Phew, I could talk more on this book, but I think I have mentioned the most important things, so I will just sign off with that I would recommend this book to everyone. It is funny, it is sad, it is exciting, you will be rooting for Madi, the romance is swoony. Read this one! You won’t be disappointed.