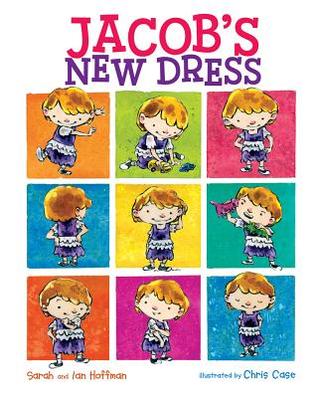 It is Banned Books Week, and I am reading Challenged/Banned books. This is the fifth book for this week.

This book was banned/challenged in various libraries for various reasons (because heaven’s forbid a boy wears a dress).

I did like the book, well ish. I just couldn’t like Jacob. I mostly found him annoying, pushy, and only a bit brave. It was nice that he wanted to wear a dress, but it would also be nice if he listened to his parents. His parents are supportive, but they also want to help him out. They know that kids will be mean, and are just trying to protect Jacob.

Christopher was just a pest, just like his friends. I felt sorry that not much was done about the mean guys. Then again, it wouldn’t be the first time that teachers don’t do anything or just say it once and then expect kids to understand it.

I did like Emily. She was sweet, kind, and stuck to Jacob even when a lot of other kids didn’t.

The art was so-so. The style was pretty decent (reminded me of Judy Moody), but while the humans looked OK, I was wondering what happened to the poor dog (???).

All in all, a pretty OK-ish book.