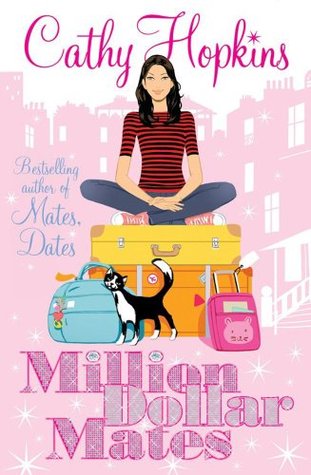 Friendship, glitter and glamour, cats! I really enjoyed this book!

So far most of my Boekenfestijn books have been second or more in a series, but I apparently was lucky with this one! Yay!

I loved that the book had hilarious moments, but also serious moments. Jess lost her mom not that long ago and she still misses her loads. Then there is the fact she moving away from her grandma’s place to be with her dad. And she is also working hard on getting better with her swimming. Alisha (one of the bigger side characters) also has her fair share of things in her life (and I didn’t like her at first, but later on I could understand her much more). There is lots of seriousness, but also hilarious situations as she falls in love with not just one boy, but two! (Though I am not really a fan of love triangles, but it was pretty nicely done in this one.) She tries to hide her cat when he has to leave. There are visits by a new cat who keeps escaping his home. And then I haven’t even talked about Jess and her mates. I just loved Pia and Jess together, they are such fabulous friends!

I wouldn’t have minded seeing those apartments myself. It sounds like a dream place. Though only the rich and fabulous get to live there. Or, well if you are staff, but then you are not technically living there. 😛

Jess was a delightful girl, I loved how silly she was. Her zombie queen routine, haha, I would have done the same, and then just like her, be embarrassed about it because I did it in front of my crush. I also liked how she was with her brother. Often brothers/sisters would be fighting, but these two were pretty tight and close. I loved that!
And I just like a girl who loves animals and treats them right.

Plus Jess and her mates were just great. We mostly see Pia and Jess together, but we also catch glimpses of Meg and Flo. They are really fabulous friends, Jess is lucky to have such great friends who care about her, protect her, and are there for her. And they are just as mad/crazy as Jess is.

I had some problems with the dad. How he didn’t give his kids a bit more time to get used to the situation, maybe even talk with them about it. Instead he moves them away, and then works almost the entire day, which is definitely not helping his kids get used to things. I get that he is also getting used to everything, but maybe it would have been better if he had gone there first, and then later brought the kids.

I also felt so sorry for Jess. She had such a hard time getting used to the whole situation. Every time she got a bit of happiness that was thrown away again. Like with her cat, or with the swimming. Not even to mention how Alisha was acting. I just wanted to hug the poor girl and tell her things would be all right.

I get why they named it Million Dollar Mates (it is explained near the ending), but it still seems weird as it takes place in the UK… and they don’t have dollars there. So maybe Million Pounds Mates sounds better then.

The ending was terrific, it was so exciting, I was rooting for her (no, I wasn’t wearing those caps).

Definitely going to see if I can find the other books in this series. Even though I am a bit worried about the JJ x Jess x Tom situation. Hopefully she will just sort it out in the right way. Though darn it, if I had known I would like this book so much, I would have taken the other book I saw at Boekenfestijn as well. 😛

Recommended to all looking for a fun, but also serious book!