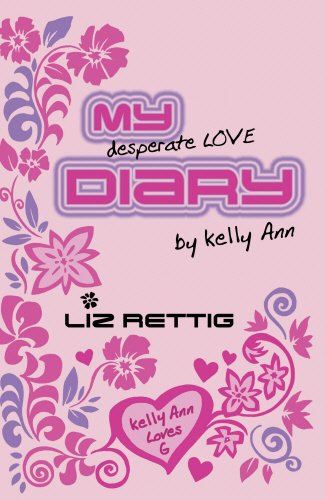 Love makes blind (and deaf + dumb) in this book as we meet Kelly Ann and see her tumultuous life!

I am so delighted with all the good reads I have had so far! All the books I bought and read at Boekenfestijn, and those bought on Saturday, are books I really liked! I still have more to go, but I have faith in them. 🙂

I spotted this book on Saturday during one of my miraculous rare bargain hunts, at first I wasn’t sure if I should bring them with me, but I just couldn’t leave them behind. And I am so happy I took them with me.

Sure, I was a bit annoyed at Kelly An at times. But mostly I just loved the girl a whole lot, I could relate with her. It is indeed true, blonde girls just have all the fun. 😛 I also saw it happen during my high school times.

I did feel sorry for her, and wanted to hug her at times, tell her things would be OK eventually, especially when all the family drama started. The mom leaving for Ibiza, finding a toyboy. The dad going depressed and drinking a lot. The sister’s unexpected pregnancy (did it happen because Kelly An’s friends blew up all the condoms during a party (no, don’t ask)). It was chaos at home.

My annoyance with Kelly An was mostly found in her blind/dumb/idiotic love for G. Everyone, even the reader, can see that G is just a playboy tosser. But yet, no matter what happens, no matter how dickish he acts, Kelly An wants him. Doing his homework, almost having sex with him, cleaning up after him, and I could go on. If this only took a small part of the book, I would probably not have minded it that much, but this thing went on and on and on for the entire book.

And then there was her blatantly blindness for Chris, which was just painful. Yes, I didn’t quite like Chris most of the book (he made some poor decisions and he would really need to find a better way to tell girls he likes them), but I still felt sorry for him. Eventually near the ending I started liking him more and more, to the point that I was hoping he would get the girl. And no, I won’t spoil anything. 😛

Kelly An’s mates were terrific, though I did get a bit tired of Liz’s psychobabble. And I was quite amazed at the patience they had for their weird friend. Quite a few people may just have given up, but they just diverted the topic, or they found something else that was interesting to her.

The book chronicles a year out of Kelly Ann’s life. She writes almost daily in her diary, though sometimes the entries are very short. At the end she reflects back on her New Year’s resolutions from the previous year.
I would have liked to see the new months start with a new chapter, instead of it being a continuous stream of entries.

I am not sure what to think of Ms. Connor, on the one hand I liked her, but on the other side I found her annoying. I didn’t like how she was so hateful towards men.

Ah, and something that I missed, the exam grades. We do get them, but those are the wrong ones, we never really read about what the right ones were and if there was a public apology. Maybe I missed it, or maybe it really wasn’t mentioned.

I really enjoyed this book. From hilarious situations to family drama to boys and romance, this book has it all!

I would recommend this one. As for me? I will be reading the next books very soon!