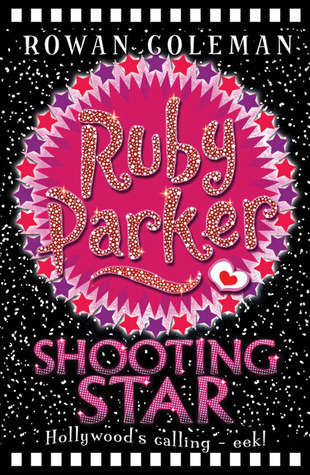 Lights, Camera, Action! Ruby Parker is back, and this time she is heading to Hollywood with her friends to audition!

This is another book from Boekenfestijn, and again, a book that is somewhere in a series. This time it is a book 6! But I never once felt confused, if anything I was curious and wanted to know more about the events from the previous books. The author really wrote the story well that she mixed in some stuff about the previous books, and also let the new story shine.

I really enjoyed the story. We first see them in the UK, we meet the cast, but we quickly move to the US, more specifically Hollywood. There is an audition for the movie version of Spotlight! and of course our cast has to participate as they had either a big role (Nydia/Gabe) or a smaller role. And they are all hoping to reprise those roles or get an even better role in the US movie version. Well, not everyone. We quickly find out Gabe is much more interested in playing sports, and Sean, well he has his reason, but the others definitely want to win and are trying hard to get the roles they want.

Of course this at times comes between friendship. Ruby, Nydia, and Anne-Marie are all trying for the main role, and you can imagine that brings some tension. It was really well written, and I could imagine it bringing tension, I am glad the author didn’t shy away from writing about it.

I would have loved to see a bit more of Hollywood, it is still a place I want to go to one day. But most of the book takes place at the auditions, or at the US home of Ruby’s mom boyfriend.

I really loved reading about the auditions. Seeing the scripts, and seeing what our group (and specifically Ruby) had to do for the roles.

Plus I liked the addition of magazine/newspaper articles.

Oh and I really liked Kristy. I was worried how she would turn out, I have read just too many books in which such characters turn out to be snobbish, but thankfully she was a sweet, caring girl, and I would love to see more of her.

There were just two things I didn’t like about this book.
First up: Anne-Marie. What a terrible terrible character she was. At times I saw another girl, but generally I found her snobbish, stand-offish, and a bitch. The way she acted towards Sean. Always pushing him to become even more famous, while she knows what happened, while she knows how it hurts him. At least, given the things said, I think she knows about it, and otherwise I do think it is high time to just talk about it. 😐 And then I am not even talking about how she acts around her friends.
I get that she has a harsh life, her parents don’t see her, etc. etc. but really? Is it needed to act so entitled and mean? To treat everyone like shit and act like you are so much better? No.

Secondly: The Sean drama. Dear Lord above, I just knew it would end this way, I saw it coming from a mile away, but I still wasn’t happy. Do people not talk to each other any more? Or give each other time to tell their side of the story? Instead they just went full on angry and started ignoring Ruby. I just found it quite terrible. It is not as if Ruby did anything wrong. In fact she has been saying to Sean she can’t be with him because of her being best friends with his girlfriend. 😐

Then again I couldn’t really see the attraction to Sean at all. I just thought he was kind of rude. The way he treated Ruby, the way he acted with his girlfriend, how he didn’t really respect Ruby’s opinion at all. Oh, this girl clearly says she can’t be with me, oh well, let’s just keep on getting close to her. Plus I was stunned that he couldn’t see what was going on with his dad. I mean really? I was just shouting at my book for Sean to open his eyes. To speak to his mother. To say no to his dad. Oh well, it really had to get disastrous before he could see the badness.

All in all, I definitely want to try out the other books in this series and see what happened there. See how they formed their friendships, see more clearly what happened to Ruby in the previous books (as it seems she went through some drama). And of course I would recommend this book to everyone.