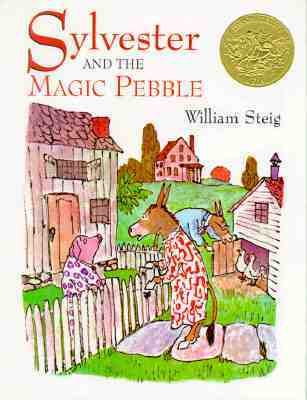 It is Banned Books Week, and I am reading Challenged/Banned books. This is the seventh book for this week.

This book was banned because it portrayed the police as pigs.

Sylvester loves collecting pebbles, especially pretty ones. And then one day he finds a magical one, one that grants wishes! What will Sylvester do now?

Of course he is going to try it out, to see if it is really the pebble, or something else. He quickly finds out that the pebble is truly magical. The first thing he encounters while going home is a lion (what the hell is a lion doing there). And he really needs a better head on his shoulders. Instead of wishing the lion away… he wishes himself into a rock. Yep, a rock. He could have wished for the lion to be kind or a vegetarian, he could have wished for anything. 😛 But no a rock seemed the best thing.

I sure didn’t expect that turn though. With the whole title I thought the book would be about Sylvester wishing for everything in life, but instead it is about him being a rock and unable to turn back. We see his family turn sad. How they tried to live their lives knowing that they may never see Sylvester.

One thing, how the hell did that pebble stay with Sylvester all the time? I know, I know, this is a kid’s book and the pebble is magical, but really, with all the snow, wind and animals, that wouldn’t be possible at all.

And like with all other animal books were animals are the doing human things, why are some animals human-like yet others are still animals (like the ducks in the pond)? And the same goes for clothing. Why did so many animals wear clothes, yet so many others are naked? I guess one shouldn’t think about it too much. But I just can’t stop thinking about it.

The art was so-so. The animals were pretty detailed, but the rest fell a bit short.

So yeah, not what I expected at all. It was a bit depressing really.