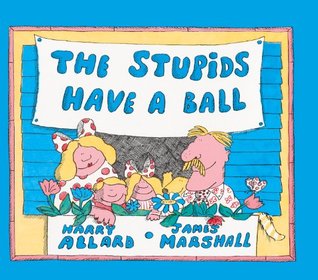 It is Banned Books Week, and I am reading Challenged/Banned books. This is the eighth book for this week.

This book was challenged/banned because of the word stupid, and because kids were being disobedient.

The Stupids are having a ball, and why? Because their little kids flunked everything in school! Yep, not sure if that is a reason to celebrate, but in the Stupid family it is! And I did have a laugh about it.

And the whole family is not the brightest bulb, even their cat Xylophone (yes really, what name :P) gets her tail stuck in her nose when hearing about the celebration.

Though apparently the cat and the dog are slightly smarter than the owners, given that they do most of the work for the celebration. (Making punch with um, well tuna, decorating, blowing balloons, etc.)

The Stupid’s costumes were a laugh. From a washing machine to just wrapping spaghetti around oneself. I had lots of fun seeing how everyone dressed themselves up. Even one as an Easter Bunny though he probably meant to be Santa Claus given how he arrived.

And also seeing how the family arrived at home. From ducks to rockets, anything goes it seems.

The twist near the end had me in stitches though. I definitely didn’t expect that, though now that I think of it… I guess it was to be expected. The name of the family is Stupid after all.

The art isn’t really my style. There were some pages I did like, and the rest also wasn’t bad, but yeah, just not my style.

But still I had several laughs while reading this book. It was stupidly funny.