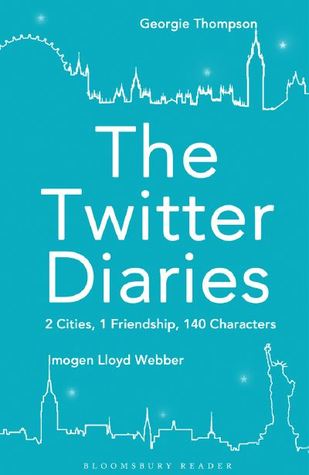 So another one of my Boekenfestijn books, and one that I almost put back (thankfully I didn’t). Funny story, it wasn’t me who noticed the book first when we got to the English table. Oh no, it was my boyfriend. 😛 And then it was me who couldn’t leave it, because I just loved the idea of a whole book consisting out of tweets!

The whole book is tweets between @StellaCavill and @TuesdayFields. Both met before the story truly begins at a party in NY. They hit off, become friends, and decide to DM/tweet to each other on Twitter. And thus a friendship builds. We see tweets about their lives, about mums (I can see that mums are the same all over the world, though thankfully mine doesn’t want me to do botox, unlike some other mums in this book), about their work (@StellaCavill is working hard to have her own company Stellar Shoes become successful, though we see that it is very hard and she is struggling a lot. @TuesdayFields is a journalist/reporter for sports-related stuff and is working hard to get higher up, to get that cushy sofa spot), about romance (@StellaCavill and @TuesdayFields have a very interesting romantic life. @StellaCavill <3 Merchbanker, @MichaelAngeloMovie, and @BugsBunnyMovie though not all at the same time. 😛 You can imagine her love life is a bit tumultuous. While @TuesdayFields </3 @HugoPr1nce and is invested in @No1Sportsman, but <3 @JakeJacksonLive (though she doesn’t know that herself, but @StellaCavill and probably other people do.), about life as a 30+ year old and what that entails (sagging skin, aged faces, and more #welcometobeing30), and more! This book will keep you engaged, it will make you want to read, read, and read.

While @StellaCavill’s work stuff wasn’t as interesting as @TuesdayFields work, I still was rooting for @StellaCavill. What a brilliant idea to make shoes for men. Fashionable shoes even! And @TuesdayFields work was just full of scandals, hilarious situations (Next time girl, pick the dress!), terrible bosses, and romance, oh and let’s not forget the terrible early waking up (who ever thought waking up at 3am is a good idea?).

This book begins at a New Years party, and ends at a New Years party. Yep, there is one year full of tweets, separated by months. Each month tells us what the girl is up to, what her goals are, and how her followers are doing (Embarrasingly low, On the Up ish). I definitely loved that the authors decided to split the book up in months. That makes it all the more fun to read + give us a bit of a time frame. As the book continues we see the girls get closer and closer to each other, sharing more and more. Even though they only met once, they are such wonderful friends. I just found it a shame that they never could meet in between things. Then again with both of them busy… it just wouldn’t work.

The girls never meet during the year, though both will be seeing certain characters they both know. Like the best side character: @SINternUK who works for @StellaCavill and is very very awesome in her work and doing what her boss wants. This includes streaking when @TuesdayFields needs some help with the paps, or breaking up a fight between two hot celebrities who both wanted Stellars. Plus not to mention all the other stuff she gets up to. 😛 Of course both girls also know @PM_TV, he is a friend to both girls.

I liked the introductions (all the @’s and some not), and also how the book begins (and ends) as a normal novel! Switching between @StellaCavill and @TuesdayFields.

What I would have liked, and what would have made the book even more fun: timestamps! We do get a general feeling of the days passing in that specific month, but I would have loved seeing a bit more specificness.
Something like:
@StellaCavill: And is it helping?
Jan 15 (would also be nice to see the hour, but considering they use DMs that is not really going to happen.)

I really enjoyed this book. It was #fabulous #youneedtoreadthisorelse and I would #recommendittoeveryone.