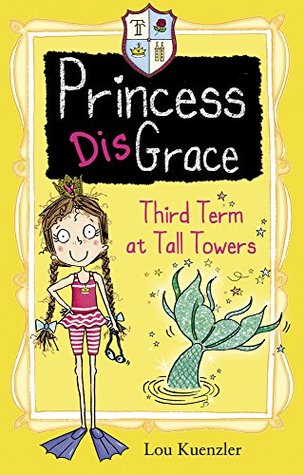 This book combines a few of my favourite things. Boarding schools and princesses, mermaids and mysteries!

So last weekend I went to Boekenfestijn, got a ton of books, including this one. I already had a suspicion it was the third book in this series, but I still couldn’t stop myself from buying this one. I just wanted to read it. And so I was hoping that I could read this book without having to read the others.

Which turned out to be the case. I never once had the feeling I had to read the other books. Plus they did tell us a few details from the previous book (which made me super-curious about those books).

I instantly took a liking to Grace. She isn’t like many princesses. Prim, perfect, frilly. Instead she is rambunctious, wild, and while she tries being more princessy, she keeps being clumsy and falling over. But at least she tries. And I really found that admirable. Quite a few girls may have just given up, but she just keeps on trying to be more like a princess. It made her so much more reliable. Showing that you can be a princess even if you are wild like Grace. 🙂
I also loved how sweet Grace was towards everyone. Not only her best friends, but also all the other princesses. And she even stayed calm towards Precious, making up some comebacks when that girl did something bad.

I loved the descriptions of the lessons, the school, the dorm, everything. It was just splendidly done, and I wish I could be a princess and also go to that school.

Plus it was fun that this was a magical world. With mermaids, with unicorns, and who knows what else.

The mystery (what was going on with Scarlet) it was quite simple, and I knew what was going on before most of the characters. It was just so easy to see. The locket that won’t open. The fact she could swim so well. The story that was told by the mermaids. Everything. It was also fun to see Scarlet figure it out, and also for her friends to find out.

I did think the Mermaid Code is utter bull. Sorry, but really? They can’t save someone? Isn’t that terrible? To have someone pick between letting someone die/drown or not being a mermaid anymore. It is just horrible that they have such a code around. I wonder what the story is behind that.

I was worried for Grace, but I knew she would pull through with that gift.

I am a bit sad that once again the mean girl trope has to pop up. Princess Precious (that name, I was just laughing so hard) is a terrible, spoiled, annoying brat. And of course the girl has two lackeys, though it seems that those two are a bit less terrible considering they did reprimand their friend at least once in the story.
She really was terrible, and I hated her attitude towards Grace. Plus I didn’t like how she was discriminating against mermaids. Like they were lesser, like they were bad. 🙁

I quite liked the style of the illustrations. They are a bit simple, but they fit perfect with the fun, easygoing story.

All in all, I really enjoyed this book, and I will be buying the other books in this series as well.