Squuuueee fangirls… cough Um, sorry, a warm welcome to the Blog Tour for Emmy Laybourne’s newest book: BERSERKER! As you may have guessed, I am absolutely delighted that I can participate in this Blog Tour. I have been looking forward to a new book by the author, and I can’t wait to read this one.

For this post I got the usual suspects of author and book information, but I also got a fantastic excerpt, and a giveaway. (Which is open internationally, so be sure to enter!)

continues squeeing in happinessLet’s get this Blog Tour started! 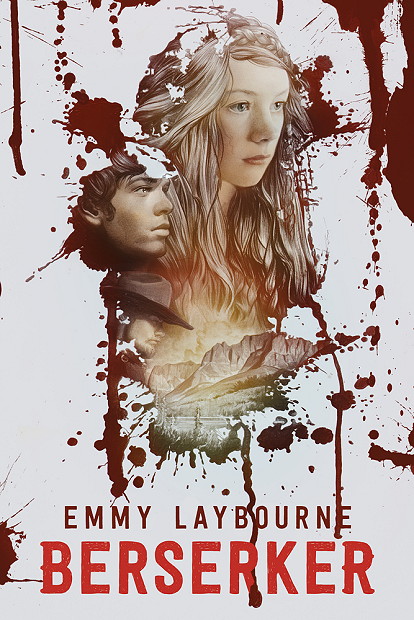 Are Hanne’s powers a gift from the old Norse gods, or a curse?

Her brother Stieg swears their powers are a gift from the old gods, but Hanne Hemstad knows she is truly cursed. It’s not Stieg’s fault that their father is dead, their mother has left, and their brother Knut has been accused of a crime he didn’t commit.

No, the fault lies with Hanne and her inability to control her murderous “gift”–she is a Berserker. When someone she loves is threatened, she flies into a killing state. The siblings must leave Norway for the American frontier or risk being brought to justice.

Aided by a young cowboy who agrees to be their guide, Hanne and her siblings use their powers to survive the perilous trail, where blizzards, wild animals, and vicious bounty hunters await.

Will they be able to reach their uncle, the one man Hanne believes may be able to teach her how to control her drive to kill? With Berserker, Emmy Laybourne, the author of Monument 14, presents her vision of an American west studded with Viking glory.

Buy this book here: Amazon|||| Book Depository
About the author: 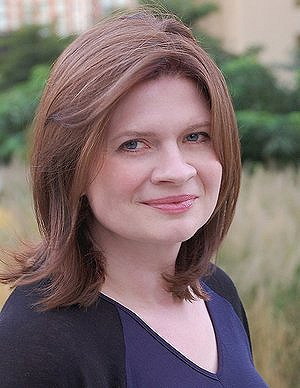 Emmy Laybourne is a novelist, screenwriter and former character actress. She is the author of the upcoming release BERSERKER (“You will love Emmy Laybourne’s vision of an American west studded with Viking glory.” – Hypable.com), as well as the MONUMENT 14 trilogy (“Frighteningly real… riveting” – NYT Book Review, Editor’s Choice) and the novel SWEET (“A gripping action-adventure survival story” – VOYA, rated Perfect Ten).
Before her life as a novelist, Emmy performed original comedy on Comedy Central, MTV and VH1; and acted in the movies “Superstar,” “The In-Laws” and “Nancy Drew,” among others. Emmy lives outside New York City with her husband, two kids and a flock of 9 nifty chickens.

The Hemstads entered the dry goods emporium in a glum mood. The store was cheerful enough, with shelves full of bolts of cloth and glass counters displaying all manner of yarn, ribbon, and buttons, as well as knitting and sewing materials. Best of all, at the back of the store, near a curtained-off area for trying clothes on, were ready-made garments for men and ladies, both.
That was a relief. With all that faced them, Hanne had been dreading what she should do if they could not purchase clothes ready-made.

The proprietress was a squat, pleasant woman who held a few pins in the corner of her mouth as she showed the girls her wares. There were white cotton blouses in several different sizes, all cut voluminously, as seemed to be the fashion, with dainty buttons at the necks and wrists. There were also fine full skirts of wool gabardine.

“I wonder,” Stieg said. “Might you know any men who would be willing to take us north?”

“North?” she asked, her eyebrows expressing her opinion before she gave voice to it. “No time to travel now. It’s blizzard season.”

The bell at the door jangled as several new customers entered.

“Yes, yes,” Stieg said, sighing as he thumbed through the limited selection of winter coats. “So we hear.”

“You might try at the saloon if you’re looking for a guide,” said the proprietress. “Though I’d hardly call the men at the saloon the best sort.”

It was then that Hanne saw Owen Bennett. He was standing near Stieg, having come in unnoticed by them all.

“A good horse is going to cost nigh on forty dollars,” the cowboy said. “Then there’s saddles. Bridles. Grub and bedrolls. Do you have enough money to get good gear? I mean really good gear?”

A grin broke over Stieg’s face.

“Yes,” Stieg said. “We have good money. We can buy whatever we you think we will need.”

The proprietress shook her head and went to tend to the other customers.

“What would be your fee?” Stieg asked. “How about fifty American dollars?”

The cowboy’s face broke into a grin as big as the one Stieg wore. “I’d settle for forty.”

“Let’s make it fifty and you make sure we all arrive in one piece.”

“I can’t guarantee it, but I’ll do my best.” He shook Stieg’s hand.

“Mr. Bennett, thank you,” Hanne said. She reached out and touched him on the arm. She’d not been able to stop herself from doing it.

Owen looked away and thought for a moment.

“I liked the look of the stock down at McCallister’s Livery better than the ones at Erlich’s. We’ll take tomorrow to gear up—“

“We need to leave as soon as we can. Tonight, if possible,” Stieg said.
Owen thought about this for a moment.

Stieg began to speak but Owen held up his hand.

“Get a good night’s sleep tonight. In the morning, we’ll meet at the Loveland General Stores.

In the meantime, you can see to your personal effects. You’ll all need good, thick coats. Mittens. Thick mufflers. Wool under… undergarments.” He seemed to blush a bit mentioning the unmentionables. “I’ll go look at horses now and we’ll be off by midday tomorrow.”

Stieg drew close to Owen, and lowered his voice.

“We would ask that you keep the news of this hire to yourself,” Stieg said.

“I don’t know a soul in this town besides my dog and my horse,” Owen said. “But you have my word.”

Hanne couldn’t help but smile herself.

Owen seemed suddenly hesitant. He cleared his throat. “Before we part ways for the evening, I’ll need a deposit of ten dollars. If it’s not an inconvenience.”

Stieg agreed happily. He retrieved his wallet from his vest pocket and counted out ten one-dollar bills.

“See you bright and early,” Owen said to them, and he tipped his hat in farewell.

Hanne had to admit she agreed.