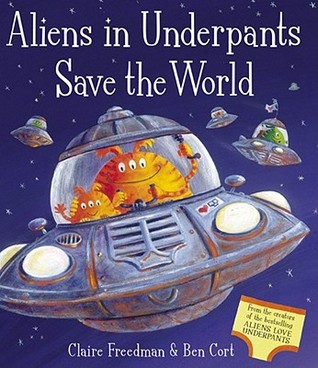 I have read a few other books in this series, and when I needed a sci-fi book for a challenge I knew I had to go for a book from this series.

In this one the world is threatened by meteorite! Oh noes! The world goes in panic, but thankfully there are aliens.. though there reasons for saving the world are less than pure (they don’t want their supply of underwear to run out). 😛

I quite loved the idea that the aliens had. Plus it was hilarious (boing boing). They sacrificed quite a few of their underwear to save the world, that doesn’t only take creativity, but also some of their precious wares.

The ending was also nice, indeed, we should be very thankful of the aliens. They did all that for us! They can steal a few of our underpants.

I did like the beginning/end pages before the story starts. They are filled with all sorts of underpants. From zebra to dots, from red to yellow.

The illustrations are pretty great, they are fun and fit the story to a t. But then again, I already knew that, that is one of the reasons why I keep reading the books in this series. 🙂

All in all, recommended if you want some silly, hilarious, alien adventures!