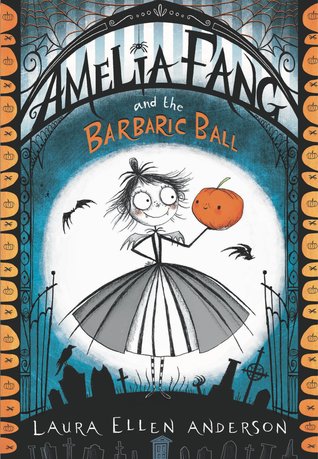 A vampire girl, a pumpkin, an annoying prince, lots of icky food (at least for us humans), and a Barbaric Ball!

So I was really excited about this book, I love Laura Ellen Anderson’s work, and I was just delighted that she would also be writing (and illustrating) books like this.

This review may be a bit chaotic, I am quite tired, but I do want to write a review, because I really love this book.

Meet Amelia Fang, she is a vampire and has a little pet pumpkin named Squashy (who is super-adorable and I now want a pumpkin pet of my own). Her parents couldn’t be more different. Her dad loves crossword puzzles and wears Hawaiian graveyard shirts, her mom is all about appearance and wants Amelia to be more like a vampiress. But they both love her dearly.

Though I have to say I was a bit annoyed at their grovelling for the king and the prince. Really, someone wants your daughter’s pet? You just give the little guy away like it is nothing? And then act all huffy and angry when your kid throws a fit? Are you guys for real? You can’t just give a pet away like that.

Amelia was a fabulous character and I loved her immediately. I loved how dedicated she was to her friends, how sweet she was towards Squashy, and how even though she wasn’t all too happy with the prince she still tried to befriend him, and to help him. Not many people would do that. Plus when she found out the secret behind the prince and the king, she kept it to herself, she used to knowledge to better understand the prince.

Grimaldi was my second favourite character, he was fun, sweet, and I just adore Grim Reapers. I had a laugh that while he was a reaper he wasn’t a full one. His task for now was to take care of toads/frogs/small creatures. He is also a great friend to Amelia and always willing to help her out. Also where can I get a scythe with disco lights? wants one

Florence, mm, while I did like that she was a rare breed of yeti, and she was a great friend to Amelia… she was also a bit too shouty for me. Plus the way she acted, eh (especially near the end, sure totally ignore your best friend while she tries to explain things). She reminded me a lot of Grenda from Gravity Falls. A good friend, but she doesn’t get the most basic of clues, shouts all the time, and doesn’t know her own strength.

I really disliked Tangine. Even later when we find out certain things about his heritage, about his mom… sorry, I just couldn’t like him. Well, I have to say my dislike got a bit less, but he will have to do much more to make me like him . He was annoying, spoilt, a pest, and oh did I mention he looks like Gideon from Gravity Falls? Less chubby, but just as annoying.

I loved that we had a light and dark world, though not everything is what it seems. I can’t wait for it to be explored further in the next book. And yes, I am not saying much, as I don’t want to spoil anything.

The story was a delightful rollercoaster of fun, hilarity, friendship, and much much more.

Of course the book is also gorgeously illustrated. Everyone looked adorable, yes, even the most scary of monsters. 🙂

I would highly recommend this book, and I can’t wait for the next one!