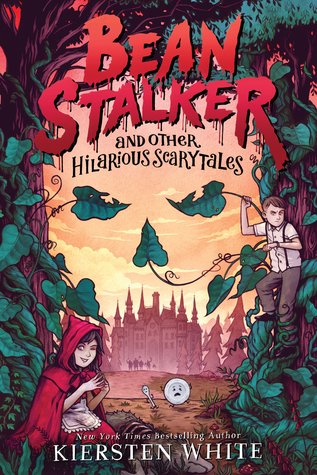 “Once upon a time, a girl skipped into the forest and became a zombie.”

I just knew I would love this as soon as I spotted the book on Twitter. I always love it when authors write a retelling of fairy tales. Especially if those retellings are filled with zombies, arsonists, talking sheep, vampires, and more!

The book also has a narrator, and while I often did like it, other times I was just bored by it. Especially the whole spelling/grammar stuff just got annoying. We get it. Pee and Pea, Reign and Rain and Rein, etc. etc..
I did like that the narrator was heard/seen by the characters (for instance by Goldilocks).

The book also loves breaking fourth wall, and I do like a book that does that.

There are also illustrations in the book, and I just adore the style. It really made the story come alive (and no, not as a zombie).

All the stories are connected together. They take place in the same kingdom, and there are other things that connect these characters together. It was a really fun surprise when I found out.

Now I have written a small review for each of the stories/chapters. I have also given them a star rating.

Prologue: Unfair Hair: 4 stars. Wow, well, I definitely didn’t expect THAT to happen when the prince climbed up Rapunzel’s tower. I loved this Rapunzel, she is totally kick-ass and Herr was pretty amazing (though creepy and too hungry for my liking). I had a laugh at how the prince acted, and then was chewed out. Poor idiot. He should have checked the tower more thoroughly. 😛 The ending shouldn’t have come as a surprise considering the hints that were thrown around, but I still found it surprising. waves bye bye to the prince
One thing that I didn’t like that much, is the narration. I just had an headache after a while (with all the spelling stuff and trying to make it oh so funny).
But all in all, a funny start to a hopefully funny book.

Story 1: Snow White Blood Red: 5 stars. I just adored this story. A whole different and bloody twist on the Snow White story. We still have an obsessed queen/stepmother (though I didn’t think she was that evil, especially considering what Snow White was, I think anyone would go a bit bonkers then). Snow White was creepy as hell, I do wonder if she knows what she is.
Narration was OK, less annoying this time.

Story 2: The Princess and the… pea?: 4.5 stars. I knew it! I knew it! I won’t tell you what though, as you do need to be as surprised as I was when that came around. 😛 I loved the story, it is a whole new twist on this story. The princesses were terrible though, but well, that was the point I guess. They can’t be too cheery or happy, or singsongy, as the queen/king won’t like that. But it was hilarious to see all the different princesses and see what made them worse than the previous princess (or even the queen).
I also loved that the stories kind of connect in a way. We meet Jack again (from story 1), we read about Jill, we hear about Snow White, we see our prince (and his tower) again. It is such a delight!
Just a shame that once again that spelling stuff raises its head. 😐 I am getting a bit bored with it.

Story 3: Little Dead Riding Hood: 5 stars! OMG this was absolutely brilliant. I loved how this story connected with the previous one (and with Jack’s as this is Jill’s story). Plus how can I not like a Red Riding Hood who is THAT. It is just perfection, though I do have to say I feel slightly sorry for the wolf. Eh, I guess he had it coming. He should have run away when he could. 😛 The classical scene between “Grandma” and Red Riding Hood was just perfection! I had such a laugh, and then I got a bit sick as the conversation went a certain way. I loved the ending, and I fear for the kingdoms.
Maybe people shouldn’t underestimate little girls, they can be quite dangerous. 😉

Story 4: Cinders and Ashes: 4.5 stars. I loved how this wove Cinderella with the prince and the kingdom we saw earlier (the one with the peas :P). It was also quite long, I believe it is one of the longest chapters in the book.
Cinderella, well… I can tell you I certainly hadn’t expected her to be like that. Or the Prince for that matter. But back to Cinderella, I guess stepmother dearest did have a good reason to keep Cinderella away from public. And to make sure she didn’t have anything around her. With the revelation now out in the open it also explained quite a few other things in the story.
All in all, a very nice twist on the Cinderella story, a twist that certainly fits and makes sense though.
Plus I loved the ending to the story, it was adorable! They do make a fetching couple!

Story 5: Goldilocks and the Three Scares: 5 stars! OMG this was just the best Goldilocks story I have ever read. I knew from the start what Three Scares meant, but it was still oh so much fun when those scares came into picture. I was worried (along with the narrator) for Goldilocks, but I shouldn’t have been worried. 😛 That girl rocks!
This was just a hilarious story. Plus how can I resist creatures like that?

Story 6: Jack the Beanstalker: 2 stars. Easily the most boring story in the book, yes, I haven’t read them all, but I never really liked Jack, so it doesn’t help it when he gets a whole story for himself. I just struggled to get through the pages, the story wasn’t even so exciting or different. There were no big twists or turns. The best thing was to see the other characters while Jack was climbing the beanstalk.

Story 7: Bad Apple: 4.5 stars. Ohhhhh, we are back with Snow White. Just like in the original story, the huntsman failed, though in this one he pays a much bigger price. 😛 There are dwarfs (or well children with excessive hair growth), and of course the prince also pops up, though with attachment. And we learn a bit more about the stepmother (I could have seen that one coming, but I didn’t). I had a laugh at Cinderella and her hubby burning stuff left and right (even going as far to spell Cinderella’s name). Yep, if the kingdom isn’t going down by zombies and vampires, I guess it will burn down. 😛

Story 8: The Boy Who Cried Zombies: 4 stars. Ah, hello again Jack. This time he is taking care of Mary’s lambs (yes, that Mary). You can imagine how the story goes, a boy cries wolf. But what happens if you do it too much and suddenly there are really wolves, or are they wolves? 😛 I loved that Goldilocks was also there and of course kicking butt! You go girl!
I had a laugh at the villagers, especially the lady+pie. What the sheep did near the end, it was brilliant. I surely didn’t expect that, and I would have reacted the same way as Jack if I had been around them and they never did x.

Story 9: Vampires and Zombies and Stepmothers, Oh My!: 4.5 stars. A great conclusion to a great book, though, yes, Jack that plan was just stupid. Oh well, I guess that is a problem for another day. 😛
It was really fun to see all the characters together, good and bad. From Cinderella to Jill, everyone was there! I loved how the good guys banded together to defeat the evil. Go team, go.

Between the stories are intermissions, poems, that continue the story or tell us what is happening in the kingdom (which are hints to what is coming).

All in all a great read, I did enjoy it a lot. I laughed, I had goosebumps, I was cheering for characters, I was delighted at how everything connected. Yep, I would highly recommend this book to everyone.