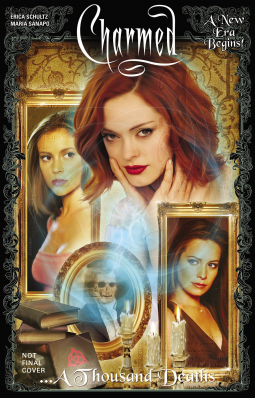 When I spotted this I was just hit with a wave of nostalgia. I watched this whole series back when it aired. It was amazing, it was sad, it was hilarious, it was exciting, and I was sad when it all came to an end. So I just had to read this one and see if it was as good as the series was.

Note: This book takes place after season 3 (due to the fact Paige is there).

So, I just adored the story, it is just like the episodes in the series. There is a creepy villain, and our sisters have to do everything to stop him. But first they have to figure out what and who he is. Sadly, it seems our demon in this one isn’t from the books.
The things the demons did, and all that happened? Pretty exciting and interesting, but while it was very exciting, I still feel that this story would have worked a bit better as a tv special or an episode rather than a comic.
Also how did the sisters not notice THAT. I would think that they would instantly notice the change, and especially when she said he knew about her being a witch. I know from the series it wasn’t really something you just told people.

The characters are also perfect. It was so nice to see them again, and see them with all their personalities still attached. That was a bit of a worry to me. Would this artist/writer capture the girls right? Or would they change them? Thankfully they went for keeping them intact! It was so much fun to see them interact with each other. You could see that this one is set a bit later, considering the fact that Paige is accepted by her sisters and how they interact together. Though nothing beats the sisterly love between Piper and Phoebe.

I am not too sure about that new girl that is popping up at times. It just felt a bit too much like she was trying to become one of the Three. 🙁 Plus I didn’t like the fact she just copied stuff, like the potions by Piper. Can’t you just learn to make them by yourself? 😐

Also from what I remember the girls were way more kick-ass in the series. During one of the battles most of what they did was throw bottles and kick a bit. Oh, exciting…

I had a big snort at the name of one of the guys: Mr. Wiskunde or as that would mean in my language: Mr. Maths. 😛 What a fitting name for a guy with that job.

And I had a very big laugh at that part where Leo was running away like a girl from a lightning ball. Whut? That is not at all how Leo would do things!

The art was a bit weird. At times too fake-realistic (just like someone cut heads out of a photo-book or from screenshots, added some blur and maybe some cartoonish effect), but at times the people just look like someone went through minimal effort to make them look good. At times I didn’t even recognise the main characters.
At that note, I didn’t recognise Leo at all! All the other characters were easily recognisable (well most of the time) but Leo? It was that they call him Leo, otherwise I wouldn’t have believed them. 😛
Plus sorry, I just didn’t quite like the Issue Covers in between the stories. Like someone had a bit too much fun with stills/shots from the series and photoshop. It would be nice for things as bonus art with a dvd/bluray of the series, but to use them in a comic series? Nah. Not so much.

The ending? sighsOf course… Nope, not a favourite of mine.

So all in all, a bit mixed feelings on this comic. Yay for personalities the same, yay for a story that would fit perfectly in line with the series, yay for sisterly love. But boo to art, to the magical girl who I just didn’t want around, and the ending. 🙁