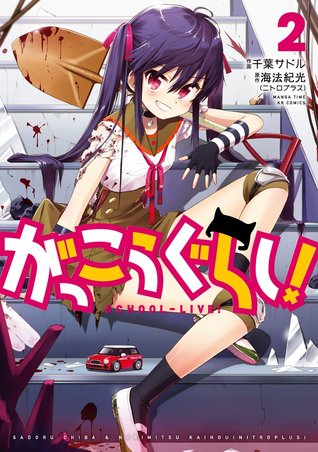 The School Life Club is going on a field trip!

I decided to partially re-read this manga (probably until the graduation part), I am currently also re-watching the anime. It is just the perfect time for it, with Halloween right around the corner!

The manga starts with a new character making an appearance, Miki, a silent girl who has lost a lot, has been living in fear for a while now, all alone.

Miki isn’t really my favourite character, mostly because she is so silent/shy, but I do love reading about her backstory. Whereas our 3 other girls were in a school during the time it was letting out (though there were still enough people around due to clubs), Miki was stuck in a busy mall. I think those of us who have read zombie books know how bad it is to be in a mall during the apocalypse. Miki wasn’t alone all that time, she was with her best friend, until.. well you will have to read to find out what happens.

Thankfully for Miki, our trio is on their way with a field trip (yep, field trip, as Yuki is still not all in the right state of mind, though she is slowly starting to see what is truly happening and what happened that she suppressed).

It was really great to read, though of course I did think it was a bit stupid of the girls to go to a mall. Again, that is just the worst idea ever. 😛 But I was also happy as it brought them outside and we could see a bit of the world around them. We saw them stop at Kurumi’s home (and see what happened there), we see the destruction, we see zombies.

And then the mall and all the destruction there. I did have a laugh at them just going on a shopping trip. Checking for music, books, trying out clothes, just your fun outing, only now with zombies. 😛

As with the first time I read it I was really excited when the ending of the trip came closer. I knew what would happen, but it didn’t prevent me from cheering, shouting, hoping, praying for a good outcome.

We already see parts of what happened to Miki and her best friend, but we see even more when Kurumi reads Miki’s diary in the last chapter of this volume (yes, not really the best thing to do, but it is kind of an emergency). Man, some people are idiots. You get bitten, you know what it means, and you still endanger so many people around you. Bleh.

All in all, this is one book full of zombies, shopping, new friendship, and much much more.