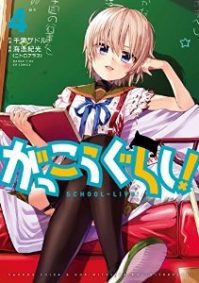 This was a heartbreaking volume.

Kurumi has been bitten/clawed by Megu-nee zombie, it just broke my heart again to see one of my favourite girls going through this. Thankfully there is medicine in that dreadful basement, but since I read the other volumes already… sighs No, I won’t tell you more than this.

Miki is on a mission to get the medicine. Why her? Why the most shy girl? Because she has no connection to Megu-nee. She doesn’t know her personally, like the other girls do. So it is up to her to get through Megu-nee and get what is necessary. I have to say that it was a shame that we didn’t see much more exploring of the basement at that point. I get that medicine is important, but for me it feels like Miki got it in an instance, without any difficulty other than Megu-nee.
It was heartbreaking how Miki and Megu-nee met, what Miki said, and then what she had to ultimately do. 🙁

In the mean time Rii-san is keeping watch over Kurumi, making sure she isn’t going anywhere. Making sure that preparations are there in case poop really hits the fan. It was just so sad to see Rii-chan have to make that decision. A decision no one ever wants to make. A decision that you know you have to do, because you don’t want your friend to turn into that. You want to stop the pain. But it is a tough decision. I know that many people wouldn’t be able to do it when it comes to it (read too many zombie books were people have to make such a decision, only to have them break-down).

It seems Yuki is also slowly gaining more and more of the real world and not the fantasy one that Yuki created in her mind to protect herself. Which broke my heart even further. You can just see that she cannot handle this reality. It is too painful. You see how far she is falling in the rabbit hole. I wish she would confide in her friends, tell them what is happening to her, telling them how she feels.

We also see some parts through Megu-nee’s eyes (before she turned zombie), I was pretty impressed that she dragged herself to that place. Plus we get confirmed that she knew about the booklet, and also has read it. How that tore her apart. Knowing that this wasn’t an accidental thing. Knowing that people from school knew about it. We see how it breaks her. I just wish she had talked to the girls before poop hit the fan. I know she wanted to wait, I know it wasn’t safe, but maybe if she talked with them properly they could have figured out a way. Plus it wouldn’t have hurt the girls as much as it did now when they did find out about it.

Next to all these heartbreaking things we have the girls go to the basement (now it is safe) and sort through the stuff there, find more medicine, and discover a whole lot more.

And the next volume will bring the helicopter and all that happens with that. If I remember correctly that will be the catalyst for them to leave. For them to graduate. They are already slowly working towards it, but I believe in the next one they have to make the decision for real.

All in all, a fantastic volume in this series. I will also be reading Volume 5, and after that I am done with my re-read for this series. I can’t wait for this series to start again, I really miss the updates and finding out what is happening to the girls, to the world.