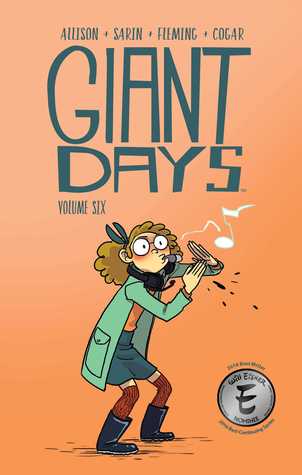 Another fabulous volume in the Giant Days series! I loved every page of it. <3

With each volume the series gets better and better, the characters are growing up (well, at least a bit).

In this one a lot of things are happening. First up the girls are of course moving into their new building, living truly together now. But of course that means a ton of new responsibility + a new level of being with your friends (like Esther learns later on in the volume, knocking is very important if you enter someone’s room). It was quite fun to see them settle in.

But there are also challenges. Like a break-in, it was quite funny (this may sound wrong, but I just can’t think of another word) how they first were going all nuts on who hadn’t locked the doors/closed the windows, but then Daisy pointed out something so obvious. Thankfully not a whole lot was stolen, but Daisy is of course heartbroken to learn that something very precious of hers has been stolen. 🙁 I just wanted to hug the girl. Poor thing.
And then it was hilarious as Susan decided to just go into the seedy underbelly and get their stuff back. Yep, that is Susan for you. Esther and Daisy both weren’t really into the plan, but decided to go along.
But other challenges also include having guests over (and what to do when a particular guest is a bit annoying), a dinner party (what to serve them when they all have something they can’t eat), and living with a grumpy old coot (though that grumpy old coot got me into tears near the end) next door.

Ingrid pops up again, and while I didn’t like her in the previous volume, I noticed I grew fond of her. She is still a bit too obtuse and doesn’t seem to get she is hurting people with what she says, but I loved her and Daisy together. They do make a perfect and cute couple. I just adored seeing Daisy’s expressions when Ingrid made all sorts of remarks about sexy time.

We also see Susan’s dad, and I just adored how the girls took a liking to him, well… mostly because of the giant piles of food he made while he was around.

I do hope Susan is able to get over McGraw, as it is really painful to see her break every time he is near her, or when he is with his now girlfriend.

There was one thing I didn’t particularly like and that is that we never really saw much of their university/lessons. It just seems like these girls have endless days ahead of them with everything but university. And that is a shame. I want to see what our girls get up to in the new year, see what lessons they have, see them being frustrated at the amount of work, that kind of thing.

The art is just fabulous, I especially love the expressions on the characters.

I think I got everything I wanted to say in my review. I really enjoyed this volume, and I can’t wait for the 7th volume. Hopefully it will feature a bit more university.