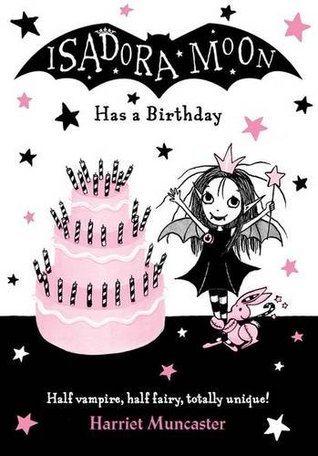 I read the previous 2 books in Dutch as I couldn’t find these in English, but thankfully it seems my libraries are now also adding Isadora Moon’s books in English! I have to say I much prefer her name in English. Isadora sounds just more vampaerie than Isabella.

In this one Isadora celebrates her birthday. Of course her parents have an idea what they want, either a vampire or a faerie birthday, but oh no. Isadora wants a human party. She wants the things her best friends also have done. From bouncy castles to fake magicians. As you can imagine her parents are wary at first, but then totally go for it. I had a laugh that they really went for it and wrote down everything that Isadora told them. 😛

But as you can also imagine what do you get when you ask a vampire and a faerie for a normal birthday? Indeed, they do their best.. but well, they just have a different idea of what is normal for humans. So the magician is real (or well, a trainee rather), the bouncy castle is a cloud (yes, and I loved it. A cloud is much, much better than a bouncy castle), and I could go on, if you want to know what happens at Isadora’s party you should read the book, I am not going to tell you everything. I can only tell you that I wish I was at that party. Dressed up in some cool costume and having the time of my life.

I have to say that I absolutely disliked Wilbur. My lord, what an ego that kid has. Thinks he can do everything, doesn’t listen, and does the most stupid things ever. I much preferred him leaving the party. Thankfully, the parents are also not entirely happy with what Wilbur does at the party. Which is a nice change from so many other books.

I giggled when the parents didn’t get the concept of fancy dress/costumes and what that means.

I could totally understand Isadora, on the one hand she was elated that her parents allowed a human party and that they did so much effort, but on the other hand she was so embarrassed as her parents act pretty weird and have no concept of what a human party really means. Plus I can imagine having your mum sing a song as music… is a bit embarrassing.

The book is also full with pink/black illustrations. They really brighten the book, plus now can really see the party unfold.

All in all, I hope that one of my libraries will soon have the Ballet book, either Dutch or English.

And of course I would recommend this book. Let’s party!