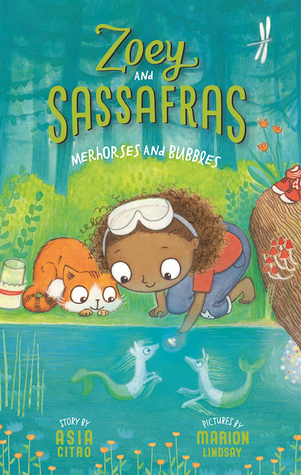 I have been eyeing this series for a while now, and decided to start it with book 3. I know, I should read book 1 first, but this one just seemed too adorable and I wanted to read it first.
And after reading it, I can say that you don’t need to have read the the first two books. I was never once confused about what was going on, there were almost zero spoilers regarding the earlier books.

I did like that this book grabbed science stuff and then added fantasy in the mix. There is real pollution, but the ones who are in danger are magical beings. It is a nice idea. Often you just have one or the other, but not both. And if I see both sometimes it just doesn’t mix well.

I had a laugh that the dad is apparently blind to the magic. His reactions to the visits by magical beings, or when his wife and daughter talked about it were brilliant. I would probably have reacted the same way as him.

Pip, like many other talking fantasy animals, was just annoying, and I kept hoping he would just disappear.

Though I did think it was a bit weird that they let their kid do most of the talking when they found out what happened. It just seemed out of place. I get they probably want her to be assertive, but I think this is problem that is best to be discussed by the adults. Plus the reaction of the kids was just a bit too weird. They were instantly convinced. Whut?

I just wanted to hug Sassafras, he was so sweet and cute!

The illustrations were adorable.

All in all, I would recommend this cute book, and I will definitely be reading the other books as well.