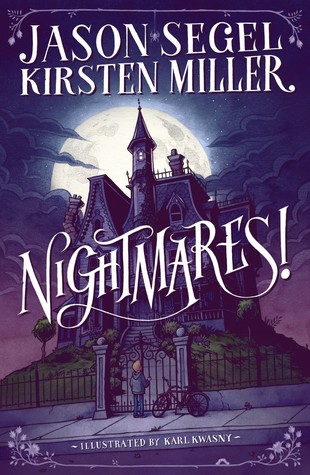 Nightmares come to life in this book! Be prepared for clowns, gorgons, vampires, witches, and more!

So I was really excited about this book, Kirsten Miller is one of the authors and I just adore her books (Kiki Strike!). And really, this book was fantastic, if you don’t mind an annoying MC.

Because that is Charlie for you. He is pissed all the time because his dad DARED to continue his life and marry a new woman. He is pissed at his brother for falling for his stepmom’s love. He is pissed at everything. Not even to mention that he has terrible nightmares. At first I thought that this book took place quite soon after the death/marriage, but instead it took place 3 years after the death, and so about 2 years after the marriage. Instead of feeling sympathetic for Charlie I was just angry at his shitty attitude towards everyone. He never gives Charlotte a chance. He just treats her like crap while all the woman does is being friendly and nice, and here is the catch, she is NOT trying to be his mother, she already told him so many times.
Instead of listening to her, as she did give him a hint about his nightmares, he just called her a witch and turned up his hate dial a bit further. She keeps telling everyone his stepmom is a witch, that she is evil, and much much more. Really, I knew from the start what was going on with the nightmare of that witch, and I was wondering how long it would take Charlie to notice (hint, very long).
There are a ton of other things that made me just dislike Charlie. He is also not really the most subtle, he has a hard time following advice or even listening to people, plans? What is that?, and I could continue. And yes, he did have a redeeming quality, he was superkind towards his best friends and would do anything for them (even though, given what we learn, it is not like he had a choice).

And yes, I even thought of just stopping with reading. But I continued.

For instance, I instantly took a liking to Charlotte. She was sweet, caring, kind, and I just adored the fact she made potions/healing items. I loved that she wasn’t trying to take Charlie and Jack’s mom’s place. Instead she just tried her best to be there for them, to talk to them if they wanted. I just couldn’t see why anyone would dislike this woman. Plus I liked the fact she knew about the Nightmare World, and I was curious about her story.

Charlie’s friends? I also liked them from the start. They were all so different from each other, Paige is more into pink and cuteness. Rocco isn’t doing well in school, but he does his best. Alfie is super-smart but isn’t athletic. They are all so fun. And I loved how they at least tried to listen to Charlie. Plus later on they become really kickass and I feel that without them Charlie would never have gotten as far with his mission.

Jack? He was a bit annoying at times, but I think that is mostly because we see him from Charlie’s POV. The times I could see without those bleh-tinted glasses, I saw a sweet little guy. Yes, he loved pranks, yes, he did some things that weren’t that nice, but I could see that he meant it well.

Dabney, Meduso? I normally dislike clowns, and Dabney was creepy, but I couldn’t hate him. Though I would have loved to see more of him, but I guess it wasn’t his time to shine, it was Meduso’s time.

The story, the nightmares, the president. They were all just fantastic and creepy and scary, and I just couldn’t stop reading. I wanted to know more about the portal, about the plans, about that world, about what would happen to nightmares when they died/left. There was just so much I wanted to find out. The authors really did a magnificent job on writing (plus the illustrations). I could just imagine myself in that world.

And then the book is also illustrated! The illustrations just fit so well with the mood and the story.

All in all, I need the next books. I do hope that Charlie’s change of attitude (as he does change a bit at the end) will hold. I don’t want him to act crap again.

Plus I would recommend this book, just be warned of Charlie. This is a great book to read during this Halloween time.