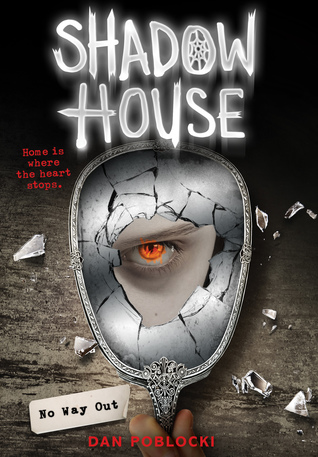 There is no way out! Or is there? We will find that out in this last instalment in the Shadow House series!

The book begins where the previous book left us. The kids managed to get out of the house, only to encounter a beast of epic proportions. They lost one of their friends. They had to run, hide, flee.

The story switches between Dash, Azumi, Poppy. It was a bit confusing at times as to who was talking, but eventually I settled into the story and didn’t have a problem with it.

The story was exciting as we now are getting to the final battle. The last 3 Specials have to be freed (but will the items they have found work on these 3 as well?), Dylan has to be saved, our 3 kids have to get out, defeat Larkspur. There is a lot of things going on, but it never felt like it was too much, instead it was just like a giant puzzle which finally got its last pieces clicking in place. I just couldn’t stop reading, I wanted to know what more we could find out about Larkspur (we find out several things, plus we meet with Connie), I wanted to know what must be done to defeat the evil within.

I was definitely noping a few times while reading, not only because of clown Dylan, but also because of the carnival (with those creepy as hell clowns). As you may have guessed, I don’t like clowns. shivers

I absolutely disliked Dash. All he does is complain, whine, complain, shout, scream at Poppy. He kept being a total toadwart towards her. Instead of being thankful, as really, thanks to her they solved quite a few things, he keeps resenting her. And hey, I don’t see him come up with any good ideas other than going back to the driveway and constantly going on and on about his dead clown brother. And sure, Poppy made some mistakes, but I forgive her, as she is doing this under heavy pressure and the constant fear of death, plus at least she came up with some good ideas that are better than going to a driveway which is definitely not the way out. And really, do you think you can just walk up to the driveway without any problems? Do you really think you can just get out like that? Haha, how cute.

Yep, Poppy is definitely the one with the plan. Though she did went a bit craycray at times, but hey, anyone would do that given the situation and how the house is manipulating them all. I was quite liking this girl, she never gave up. She kept going even when Dash wasn’t amused with her.

Azumi, I still feel sorry for her, losing her sister, seeing her in the house. But also that she needs to be the mediator between Dash and Poppy. She is already completely terrified, and then she has to stop those two fighting, and also from breaking up. At times I wanted to shake her, she should stop feeling so jealous. Yes, it may seem that Dash and Poppy aren’t afraid, they aren’t as affected as she is, but that is all just a front.

I had quite a few worries about this one ending. I knew this should be the final book, but given how the story unfolded and how little progress was made at times (especially in regards of their way out/defeating the evil), I thought there would be yet another book. Don’t get me wrong, I wouldn’t mind more story, maybe from the POV of the first groups, but I wanted this story to be over. These kids deserved to be free.

The ending was really exciting, and it was definitely a great way to end this series. Yes, I am keeping it vague, if you want to know if our trio got out, if they defeated the evil, you will just have to read the book!

Something I did want is an epilogue. A few weeks after, or a few years after. There are still some things I want to see. 🙂

Ah yes, and let’s not forget the photographs/images that are spread throughout the book. They make things even more scarier and creepier. I know that at times I dreaded flipping the page as I just knew there would be a scary image waiting for me.

All in all, this is one book (and series) I would highly recommend to everyone! It is spooky, creepy, exciting, and you will not be able to stop reading.