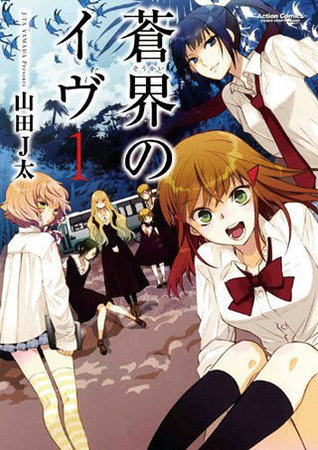 Review for the first two volumes!

7 students, 1 bus, what started as a normal day for these girls ended in something way different. While their bus is driving mysterious fog appears and swallows the bus. The bus bumps against something, and the driver steps out to check. He is probably counting his blessings as he got out and is still in the current era. But everyone on the bus is transported to a different world, a world full of prehistoric beings and more. Help is not coming, so these girls have to survive the best they can.

The girls couldn’t be much different, but even with some arguments, they seem to manage being together just fine. Working out how to survive, what to eat, chores, and much more. They are really trying to make the best of their situation. I was pretty impressed that they didn’t go for some standard survival route of the girls going ballistic on each other.

The monsters (wolves and dinosaurs) were creepy (a giant NOPE), and I was very worried about our girls. What else would be lurking in this world? Are these the biggest threats or is something much bigger coming? I would also have hidden in the bus for a while. Though given THAT it was indeed best to move along with the bus and find a safer spot.

I wasn’t sure how to feel about the reveal on the last pages of the first volume. Was that necessary? Why was that hidden? Why did that person go along with it? And why is that girl being so creepy about it (and in volume 2 even more). Come on, you are 17, that person is about 12/13. I know that isn’t much of a difference, but it certainly doesn’t help that person looks like 10 and you look about 18/19.

It was interesting that messages can, by magic or hope or wishing, be send, I still wonder how that works). Thankfully that one of the girls has a charger that can be powered by solar energy. Now they have a means of receiving/sending messages even if it happens magically. And not only messages, they can also consult information they have on their phones (for instance one of them has some research/encyclopedias on her phone).

We also meet a new girl, a girl who was born in this land. She is a tiny thing, and can barely speak or understand Japanese or English. We see her story and it was just heartbreaking to me. Poor thing. 🙁 I hope the girls can help her out, teach her about life and all that stuff.

Plus along with the messages we see Shiina’s boyfriend and Shirayuki’s younger brother try to figure out what happened to the bus and how to bring everyone home again.

The art is pretty nice, especially the surroundings are gorgeous (though the monsters are just too creepy). Hilarious fact: It took me a while to see that those were hairclips and not horns on Shiina’s head. 😛

Hopefully one day I am able to read the last volume, I hope that there is a good conclusion to this series and that it doesn’t get rushed (though I fear it will).

I would definitely recommend this manga to everyone.