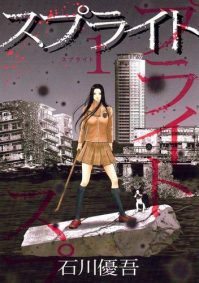 An earthquake, a mysterious black fluid/substance, and a cast of characters who are all just as confused as I was. 😛

So I was looking around for something creepy to read, it is after all almost Halloween! While checking MAL and the recommendations there, I came across this one! It sounded right up my alley so I went to check it out.

And on the one hand I am really glad I check it out, but on the other hand… I need an aspirin now. The explanation on what the black stuff is? Why it is around? Why it does what it does? Eh… I get it partially, but mostly I just think I need to be high to understand it fully. 😛 I do have to applaud for having an explanation added in the first volume. The many times I read manga series were you are just on your own. Eventually you will get an explanation but it can take x volumes.
Of course I won’t spoil what the black stuff is, you will have to read that explanation yourself. And then I wonder, are you going to be like me and the MC? Or are you going to be like the uncle and those never-aging kids?

As if the whole situation wasn’t confusing enough, the ending throws a cherry on top. I hadn’t expected THAT to happen, though I guess given what the black stuff is it makes sense. Somehow, somewhere.

I do hope we don’t see much more of those brothers, as I really disliked them instantly. Not only did they just steal food, they also didn’t listen, aren’t up for reasoning, and are frankly too rude.

Also I was really worried for Albert (the dog) in the beginning. I was already flinching as I thought x had happened to him.

There are also some gruesome (and frankly disgusting) parts, not a lot, but especially one stayed with me for the entire volume.

The uncle? Sorry, I am sure he has his reasons for living like this, and acting like this, but I just couldn’t like him. He was so wishy-washy. His younger niece (our MC) has a better head on her shoulders than he ever will.

The art? Eh, it is so-so. It tries to be more realistic but I just found it ugly at times.

All in all, I did enjoy the ride, but again, I do need an aspirin. Would I recommend this manga? Well, yes. But also no. I would say decide on your own if you are up for a manga with a very weird explanation.