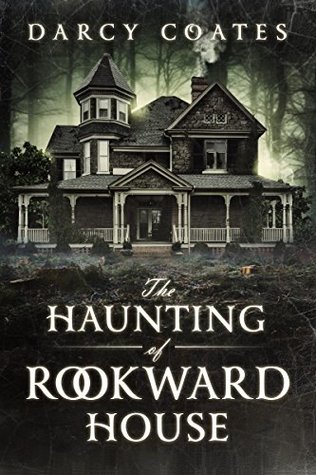 So yesterday I had a busy day and only managed to read 19%, until the evening that is, when I had about an hour before I wanted to sleep. In the end I read about 1 hour and 30 minutes because I didn’t want to stop at 78%. I just needed to know how it all ended. I needed to know if Guy would be OK. Plus it was just so scary, so exciting, I just couldn’t stop even if I wanted to.

The book begins in 1965, but then switches to modern day. Most of the book is set in the modern day, but there are also 1965 parts interspersed throughout the book (well up to a certain point at least, tee hee, but I am not telling when as that would be a spoiler). I did like how the author did those parts. They are flashbacks, but at the same time they are also dreams by Guy during the time he is in the house. He becomes Thomas. You can see him grow increasingly afraid, confused, and worried as the dreams/flashback take a turn for the worst.

Guy is living with his mom, for reasons. Though we don’t find out why until much further in the story. I did like that this was done, sure I was very very eager to find out what had happened, why he was in so much pain, but the pacing was perfect. We learn more about Guy first, we see his personality, we see his problems, and then we slowly find out bit by bit what was going on. Yes, it was a bit strange that he told total strangers his story, however I can imagine. You may never see those people again, and you can finally tell someone, unbiased, about what happened. You know they won’t judge you like all those people in town.
When we do find out what happened to his girlfriend I was heartbroken for Guy. That poor guy, he made a mistake. And it destroyed so much.

During a clean-up of his mom’s attic they find the deed to a house + a few acres of land. Of course Guy is instantly intrigued, he sees a chance to start a new life. Maybe not at that house, but he can sell it and then buy a house somewhere far away and take his mom there as well.

The house, well given that I already had a suspicion about it due to the first chapter, was creepy as hell. Sorry, I just knew right from the bat that this house just should be burned to a crisp. So what if the land becomes worth less, it is still some money! But no, our dude has to go inside and try to fix it. He doesn’t even care that he gets creepy feelings, or sees a woman around the place. 😛
I do have to say that was admirable, if not a bit dumb.

As the story continues it becomes increasingly creepy, disturbing, scary, and I noticed that at times I was breathing faster. Plus I got startled by every sound. The appearances of the ghost… it certainly didn’t help out. She seemed to be a bit beyond what a lot of ghosts can do (just appearing, maybe moving a few things), she could do a hell lot of more and that upped the NOPE-factor very fast. She was creepy as hell. And she was that when she was alive as well. I felt sorry for Thomas, but I was kind of pissed off when we learn how he met Amy. sighs Dude, really?

Guy just keeps on working even though the house gets increasingly creepy. Ripping off vines (with some very gross descriptions), throwing away furniture and other stuff, and much more. He did get pretty far. Just a shame of the ghost and the terrible history that comes with the place.

Of course after a while Guy wants to leave, but I guess you can imagine how that goes. Amy has a new prey and she is not letting him go away that easily.

I did think Tiff’s thing was a bit too much. I won’t say more then that, but yeah, I didn’t think it was needed.

The ending was fabulous. I am really happy as I didn’t think it would happen, or that they would do x. So imagine my delight. Yay! Haha, I know, I am keeping it vague on purpose, if you want to know the ending, you will have to read this creeptastic book.

One thing that was a bit annoying, and my boyfriend had fun watching me shout at my book, were the horror cliches that were all over the book. Oh hey, I have no bars, let me just go into the house again and up the roof. Yeahhh, that sounds like a plan. Or hey, I am having nightmares and I feel uncomfortable in the house, maybe I should leave, oh wait, nahhhh. And something I also see often (and not only in books) people who pump all their money into a house without even checking it, making sure it is good house. It was slightly annoying, but on the other hand it made me more involved with the book as I was shouting at and shaking my Kindle. 😛

All in all, I can’t wait for the next book by this author, hopefully it will be as creepy as this one! Highly recommend to everyone, this book fits perfect with the Halloween season!