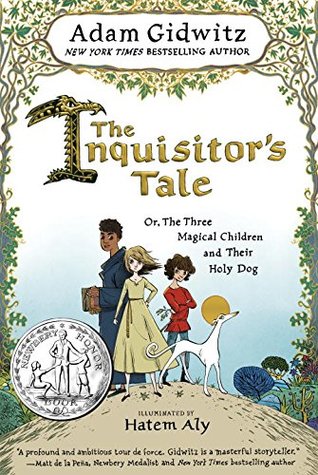 I was squealing when I spotted this book at the library, I didn’t know that Adam Gidwitz had written another book. I just had to have to bring it with me.

NOTE: I am tired so this review may be a bit chaotic.

Three kids, all three with amazing gifts (visions, healing, strength) and their holy dog are on the run for the King. How did it come to this? Well, we find that out through stories people tell at a certain inn, an inn also visited by the kids themselves (not only once, but twice as the story comes together).

The book consists of 2 parts (at least I would consider it that). The first part is the story of the kids told through the eyes of various witnesses (and one magical/holy nun). The parts from the nun are more from the POV of the children, whereas the others are from the POV of the one who saw it all happen. The second part is from the Inquisitor’s eyes (and the text is all bold there just like the times when he used to talk). I also liked that during the time we see the story through the Inquisitor’s eyes we also learn about him. About the person he is, how he came to be in that place, what his plans are.

Every time we learn something new about the kids (backstories), until they finally reunite together. And then we see their adventures together. Dragon hunting, saving books, figuring out who is foe and who is a friend. As that is a thin line in a country so drenched in religion. Even if they can do miracles, there are people who might not see it as that.

My favourite character is Jeanne, followed by Jacob, and then lastly William. My problem with William was that he was a bit too violent for my taste. I loved him when he was pondering life’s problems, but when he was bashing in heads… not so much. Jacob was an interesting character, but there was something that didn’t sit well with me about him. I am not sure how to explain.
Jeanne was just terrific. I loved how she stuck to what she believed, no matter what happens she doesn’t waver. Plus she is strong, not afraid. Not even when bound, she stays fierce.

This book is all about religion. From crusades (bleh) to how Jews are treated to how everyone is supposed to be a good Christian to saints and miracles. There are angels, God, nuns, priests, and more. At times the subject (especially in regards to Jews) was a bit heavy.

It was also a book that seemed like it went on and on. It happens sometimes with books, they are AMAZING and you want to read it all, but it just seems like you can’t get everywhere.

I loved how, like with all Adam Gidwitz books and stories, the narrator pops in between the stories. It is a bit less in this one, but it still happens and I just adore that!

The ending was terrific, I was delighted for everyone. Though I have to say there were a few things that made me go: OHHHHH, OMG? Flips back to the beginnings to check if it was true

The book is also, just like medieval texts used to be, illuminated. The borders of the pages have gorgeous illustrations crawling all over. Sometimes featuring things that are happening in the story, and sometimes it goes for the weird. 😛

All in all, this is one hell of a book and I would highly recommend it to everyone. You won’t be disappointed. It is funny, but also serious, it is miraculous, sad, beautiful.