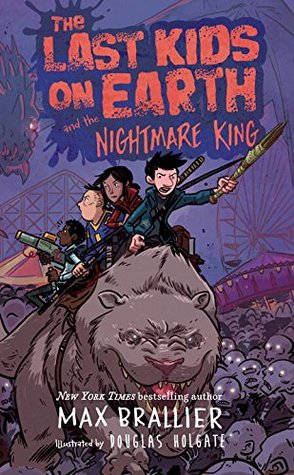 Another monsterific book in the Last Kids on Earth series! It is the third book and it brings excitement, prophetic dreams, hope for humanity, but also sadness. There was never a boring moment while reading.

We start off with a Real Life Mario Kart race, yep. One of the most fun games in existence (though frustrating as hell), now in real life. Boy. I wouldn’t mind participating in that.
But the fun is quickly over when our group finds a radio. Now I can hear you think, why is this a bad thing? Well, while it is good that there may be humans around, and it may mean several of our group may find their parents, it also means that Jack may go lonely again. After all before all this began he didn’t exactly have the best life.

And that sets the tone for most of the book. Jack being frustrated, not sure if he should support his friends, but he is also sad and worried. To make it up he tries his best to make everything super fun for his friends. Making up new things to have his friends forget about that radio and to not leave him. At times I was a bit frustrated. Dude, these are your friends, they are not just going to drop you when they meet up with their parents. Just talk to them (and not wait until it is all too late) honestly, I am sure they can understand why you act the way you do. They know you had no friends, no family, no one before this happened. They know that it wasn’t easy for you. Just tell them!
But for most I just wanted to hug Jack, tell him it would be fine. And that he is a terrific friend.

Really excited about the finding of the radio, and what that brought with it. I am more than happy that there are apparently still humans alive and well, somewhere! I was already wondering about the rest of humanity. I am sure there are more lucky survivors like our group.

Next to the radio, finding parts, and all the fun Jack is trying to cram into every day things, we also have a King Wretch flying about and prophetic dreams. And we also have a visit from a big baddie we already met before! Plus new monsters (I definitely didn’t expect THAT monster THERE, but I did love it and the name Jack gave it), and a trip to the amusement park (which apparently still works, yay!). Of course we also have some new inventions by Quinten. And zombies!~ Lots of zombies!

Oh and did I mention the battle near the end? OH yes, we have a new battle and it is awesome! I loved their battle plan, it was the best one. Jack sure is a great leader.

And of course the book is filled with fantastic illustrations.

The ending, well I can just say that I want the next book now!