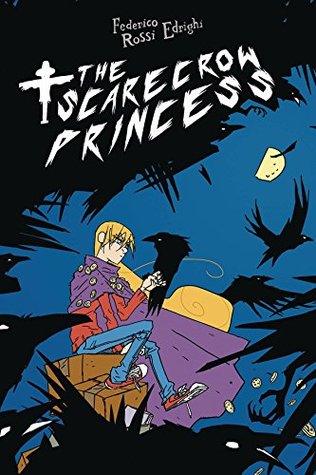 Welp, I was all entranced by this one. The blurb sounded amazing, I loved the fact that it would be for fans of Coraline (which I am). But then I started reading…

And our MC was, and is, a terrible terrible, whiny little brat. Even though, I have to say that she doesn’t look 14, more like 17 or 18. Though she acts like she is 11. 😛 I get that moving isn’t fun, that it is bleh. But really, stop with the attitude. Throughout the book she acts like a total wart. She is grumpy, snarky, mean, rude, and bleh. I disliked her throughout the whole book.

The story was a bit confusing and it was just a bit too fast-paced for my like. One moment she arrives, argues with a crow, meets a new friend, gets home and suddenly the Crow dude is there. Whut? They barely have been around for a few hours… And then other things happen (like our MC finding out her powers), but sorry, it just felt so hilariously fake that I could only shake my head instead of being amazed. Within a day she acts like she super awesome, she has pretty much control over her powers, and knows what to say. How? What? What is truly wrong with just slow development. Just give us a week with this girl so we can get to know her and her family. See the town. Find out more about this crow dude who looks like he stepped out of some bad 80s anime. 😛 And then of course we can save the day/world. Wage wars etc. But first let us get to know people. And please, no instant power control. I hate that.
Plus really all the power upgrades she went through felt like I was watching a saga in Dragon Ball (Z/GT). OH hey, you thought we went through all the phases, but oh no, here is another form, and it is not even his (sorry, her) final form!

At halfway point I was just bored, I couldn’t imagine going on but I wanted to know if her family would be saved. So I struggled on.

“I thought we were friends.” Wow, wow, hold on. You just met like, what? 3 days ago? And now you are all sad when she doesn’t want to tell you all the details of what is going on?

The ending was OK, I guess. It was a bit anti-climatic, and slightly boring though. Did her mom and brother remember what happened? Suddenly x died? What happened to y in x’s house? So Alma saw our MC as more? If I have to go by the conversation. That is a bit weird, as I never got that vibe from anywhere in the story.

-1 star for the art. Like I said before in a graphic novel, the art either breaks it or makes it. And sadly in this one it… breaks it. To smithereens even. Hair that does magical things (sometimes it is poofy, other times it disappears, and I am not even talking about the bangs on her forehead). Characters that look different as pages pass by. What is up with those eyebrows? Items appear and vanish. And I could go on. Such a shame. Also during the end battles… ewwww that was just a bit too much at times! Plus I had some laughter at the censoring of the girl and guys parts. Boobs visible! Nipples there! But for almost all the panels the other parts were conveniently covered by the crow stuff. It reminded me a bit of anime. How tv-series often would add some magical bar of light, steam, or shadow to censor certain parts. 😛

All in all, I had hoped for more, but sadly this one was just not for me.