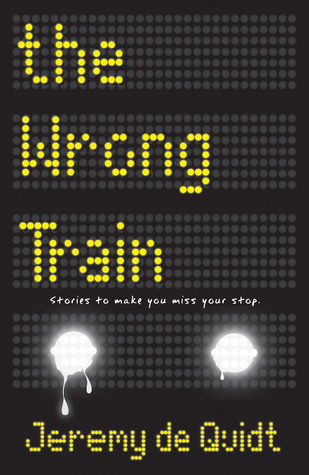 “That’s it. Train will come,” said the man. “Always comes after we’ve played my little game. “

A boy who takes the last train suddenly finds himself in a very dark last station. He meets an old man and his dog. I knew from the start not to trust the old man, and then he started telling stories and I was definitely NOPING my way out of there. I just wanted to scream at the kid to just go for the rails and walk, no matter how long it will take. Though then again… given everything… maybe walking is also a bad idea. The boy got increasingly more frustrated, and I couldn’t fault him. I would have done that as well. You are lost, you want to go home, and you have an old man tell you stories that are disturbing.
The ending was quite good, I hadn’t expected it, but I guess I could have seen it coming.

I had to say the old man/boy parts were a bit plain for me. It just didn’t seem to go anywhere, and I grew increasingly annoyed with the old man and how he acted.

In the end I have to say the stories were disappointing, too. There were a few gems here and there, but most of the story just didn’t make sense or were just a bit too much NOPE for my feeling. Which is a shame. I was really looking forward to reading this book.

I did like the small illustrations that were featured at the start of the stories.

And lastly before I get to the reviews for the stories, the ending of each story reminded me of Zekkyou Gakkyuu.

I have written a small review for each story + given them a star rating.

Story 1: Nanny’s Little Candle: 2 stars. Well, this wasn’t a good start at all. There were countless things that I just disliked. Starting with how the mom never believed her daughter, how the mom never cared about how she felt, how the daughter just lit those candles, the ending (sorry, but that ending was disturbing and sick). I do hope the next stories are better. Nanny was scary, but eh.

Story 2: The Security Light: 4.5 stars. OMG, this was terrifying. All of the sudden I am sorry I am reading this while it is a) night b) my boyfriend is not at home.
I loved how the story was told, how it went from a few things happening, to complete fear. I didn’t dare to breath, nor did I dare to blink, afraid to miss something. The ending was sudden, but pretty great, it does fit the story.

Story 3: Your Lucky Day: 5 stars. Welp, this was just creepy as hell. Plus we have some standard parent stupidity. Why listen to someone who knows about cars? Just Rock and Roll, right? Or why listen to your kids when you see they are not feeling comfortable. And who the hell speeds like that? sighs But all in all, it was a very spooky read, and I just loved how it all build up until BOOM. shivers

Story 4: Babysitting: 4.5 stars. This was darn creepy. I knew from the start something was wrong and I wonder why it took the girl so long to notice something was off. I would have just called my mom way before I reached the house. 😛 But I guess there would have been no creepy as f story if the girl did that. Babysitting from hell. Also can we please have a happy ending for once? I would so dearly want one.

Story 5: Picture Me: 2 stars. Mostly because this was just confusing, weird, and I still have no clue why the girl had that happen to her. Because she opened the photo album? Or something? But I am sure others have opened it before, so um, confused much? Also disliked how everyone just didn’t believe her. The girl is breaking apart, but no one cares? Whut? The last page was just weird and it confused me more.

Story 6: Soot: 2 stars. Another disappointing story. There is just so much potential in this one, and I think if it had been longer, if more could have been told, it would have been better. Now we still don’t know much about what happened, who that thing is, is it a soot ghost or something? The ending was sudden and I hadn’t expected it yet. Plus that xx… no thanks.

Story 7: Dead Molly: 1 star. I have absolutely no clue what happened in this story. So they played a game? The boy kept waking up and seeing a dead woman? Something like that? I am either too tired or this story was just not making sense. It wasn’t even scary. Whereas the others were eh, they were still creepy, this one just had one jump scare, and that was it. Wooohooo… 😐

Story 8: The Black Forest Chair: 1 star. Another disappointment, another story I just didn’t get. It was just weird. And a bit disturbing if I have to be honest, though I can’t explain why exactly. But I did like the MC, and the mom was also pretty nice.

So for the short stories in between I would give 2 stars. For the train + old man parts I would give 2.5 stars. I am rounding the total rating for the book to 2.5 stars.