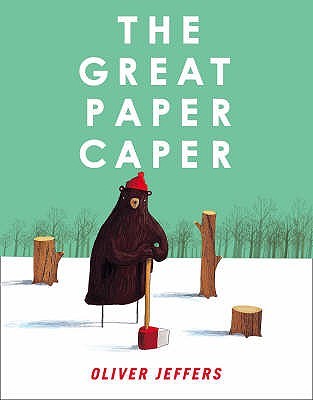 Read this book in Dutch, but I will be writing this review in English.

I spotted this book at one of my libraries and just had to have it. The cover, the blurb, they both sounded so much fun. And then I got the book and saw it was by Oliver Jeffers. Imagine my delight! I just love his work, and was even more excited to read the book.

This was a very fun story, though I didn’t always like the bear. I guess we are meant to not like him for a bit of the book, until the moment we find out why he has been cutting trees left and right. And now I can hear you shout, but Mehsi, that is a spoiler! Well, actually, no. Unlike the animals we quickly see who the culprit is. Plus the cover!
I just found it bad that he would just cut down trees, or parts of trees. You could clearly see there are people living in those trees.

Yep, it takes the animals most of the book to figure out who is cutting down the trees. It isn’t until someone finds a certain object that they find out who it is. I did find it silly that it took them that long to figure it out. You only have so many animals in the forest, and instead of going by every one of them, they just did hours of crime scene investigations. 😛

After the animals find out who the culprit is the book turned even more fun. There was a trial, and then the animals decided to help the bear with his problem, which I found really nice of them. They could have easily stayed angry.

The ending was hilarious.

The art was pretty great, sure, I had a laugh at the fact the animals (and humans) all have stick legs, or the orange nose-thingy that the humans have. But the style is still good. 🙂

Oh, and I am definitely more happy with the Dutch title: De grote bomenrover (The Great Tree Caper). It just fits better with the book.

All in all, I enjoyed the book. Especially the ending was a favourite part of the book for me.