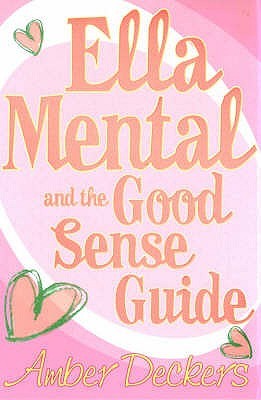 Say hello to Ella, or Ella Mental as she is called by her friends!

Ella is an average girl (especially if you put her next to her friends and their problems), she is a bit insecure (then again, that is goes for most teenagers), but I took an instant liking to her. She was sweet, friendly, kind, and I had a laugh at the things that popped in her mind (the nicknames she gave to people (like Glen who kept winking: Cyclops). But I was also cheering for her, to speak up a bit more, to put herself first over the rest (she also deserves a bit of recognition). Throughout the book she tries to help all her friends. From Tom-Tom to Toby. I also liked how she seemed a bit flighty at times, but you also knew she had a big brain and was truly smart. I loved that she loved to read.

There was also a bit of romance. Ella is falling head over heels in love with Toby, but a misunderstanding (which made me laugh) has them falling out. If only Toby knew what happened when he did that, but I guess that would have made the book lose one of its biggest plots.
So while she is still thinking about Toby, she meets Glen and tries to date him (which results in some hilarious scenes that had me rolling with laughter).
The romance was written really well, though of course I just wanted Toby and Ella to get together. These two are too adorable + I quite like childhood friends gone romance!

I also had a laugh at Pearl and her dramas. That girl clearly has no common sense in her mind. The things she gets into… dear heavens how did she even make it to her age.

I did think Ella and Anna’s parents were a bit too much. Those rules especially were just weird for 15-year olds, it just felt like they were thinking the girls are 10 or so. Don’t get me wrong, rules are needed, but is it necessary to also punish Ella? She hasn’t even done a thing, it was her sister who did x and y. 😐

I was a bit amazed that it took everyone (Toby/Ella/friends) to find out what was going on with Toby’s parents. Really? They didn’t think it was x? I knew from the start that it was that.

Also the blurb states that Ella will have to do without her guide/that her guide is of no help to her, and I thought this would mean that we barely would see this mysterious guide of hers, instead we see it all the time. Every time a problem arises the guide pops up. 😛 It was quite interesting to see all the quotes and things she had written in there.

There were also a TON of problems. I thought this book would just focus on Toby x Ella, but instead it focuses on abuse, parents who cheat, racism, bad decisions, boyfriends demanding their girls to change for them, and I could go on. At times it was just too much, and I even wondered aloud what would be next. What else the writer would think off. Don’t get me wrong, it is OK if a book features real issues, but it is just too much when EACH AND EVERY character has a problem in life that varies from normal teenager stuff to racism.

I didn’t like Frannie, not at all. When we first met her I did think she was a sweet girl, but she quickly turned dark, grumpy, and angry. Throughout the book we see her situation worsen, but instead of getting any hints or seeing anything happen with her, it takes until the end before we find out what is truly eating her. Something horrific, something terrible. But yeah, that didn’t make me like her still, yes, I sympathised with her, I felt horrified for her, but after the whole book of her acting bleh… I just can’t switch over instantly to like.

Bonus points to the fluffy cover! It was such a nice surprise when I spotted it at the second-hand department of one of my book stores and felt a very soft cover.

All in all, I really liked reading the book, there were a ton of things that I enjoyed, that had me laughing, that had me cheering, and I am definitely going to buy the next book in this series (well, provided I can find it somewhere it seems to be out of stock on Amazon).