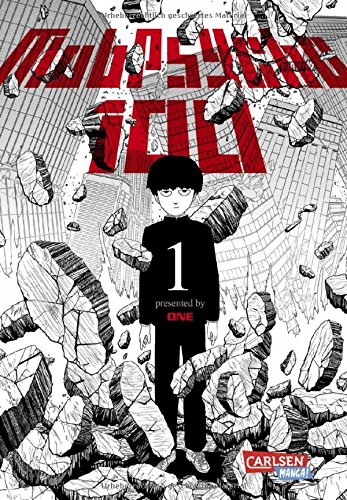 Haha, this was as funny as I had hoped it would be. I loved the anime, and I am glad the manga is just as fun (and it seems the anime did a fantastic job on following the manga). Thanks Carlsen for licensing this volume and bringing it out in the world!

Say hello to Mob, or Shigeo. A psychic/esper with a giant power lurking inside of him. Watch out if he reach 100% and shows some real emotion, no one can stop him then! Yep, normally Mob keeps away from showing emotions and while this makes him a bit bland and at times a bit annoying, I can imagine why he keeps his emotions at bay.

We see Mob as he makes it through his daily life. Working for Reigen (a guy who pretends to be a psychic/medium), finding a club so he can become popular (yes, even though Mob doesn’t seem to be interested in much, he has a girl he wants to impress and she falls for sporty guys).

There is one big battle near the end of the volume, which will bring a, at times annoying, new character. Dimples. I had a big laugh at the cult and what it did/tried to do.

Since the anime followed the manga, I am guessing there won’t be too many surprises along the road (well, up to chapter 50 which is where the first season ended). But I am still very much excited to reading this manga. I want to see all the characters, see Mob’s brother some more, see our weird hairdo guy (we already saw him for a short bit in this volume).

The art is pretty terrible, sorry, but it is the truth. But for some reason I didn’t mind it that much. If anything it made everything even funnier to read. 😛

All in all, I had a lot of laughs while reading this one, and I can’t wait for Carlsen to release the next volumes.