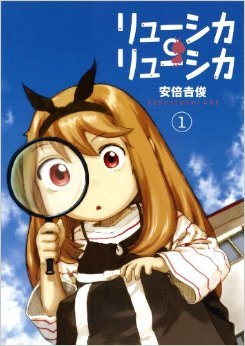 Meet Kimika, or Ryuushika, a little girl with a giant imagination.

I love Yotsuba&!, so when I spotted this one, by one of my favourite mangaka (Abe Yoshitoshi) I just knew I had to read it. It sounded so much like Yotsuba, and after reading it, I can safely say it is not only the blurb or the cover, but the story itself is much like Yotsuba.

Like Yotsuba, Kimika has a vivid imagination. When a storm throws all the garden stuff around instead of seeing it as most people do (just the aftermath of a storm), she sees a giant monster who made all the mess, plants that are running away. A lot of normal day to day things get imagined to grand proportions, often to the annoyance of Kimika’s brother and sister.

And like Yotsuba, Kimika isn’t shy to speaking (or shouting) what is on her mind. Like during the bird poop segment she screamed POOOOOPPPPP when she spotted ice cream that looked like a turd. 😛

Though I have to say that at times Kimika’s behaviour annoyed me. I get that she is a little kid, but at times I would have liked to see her act a bit more normal and not overreacting to everything.

I also liked the sister and brother, I do wonder what is going on with the mom/dad though, we never see them pop up. From one comic it seems that at least the mom is barely at home, as Kimika asks Santa for her mom to be home during Christmas. (Which yes, brought tears in my eyes.) No clue where dad went.

Of course the art is fabulous, but that is no wonder given it is Abe Yoshitoshi! He really has a way of drawing Kimika and her vivid imagination.

I would recommend this one, you will laugh yourself silly.