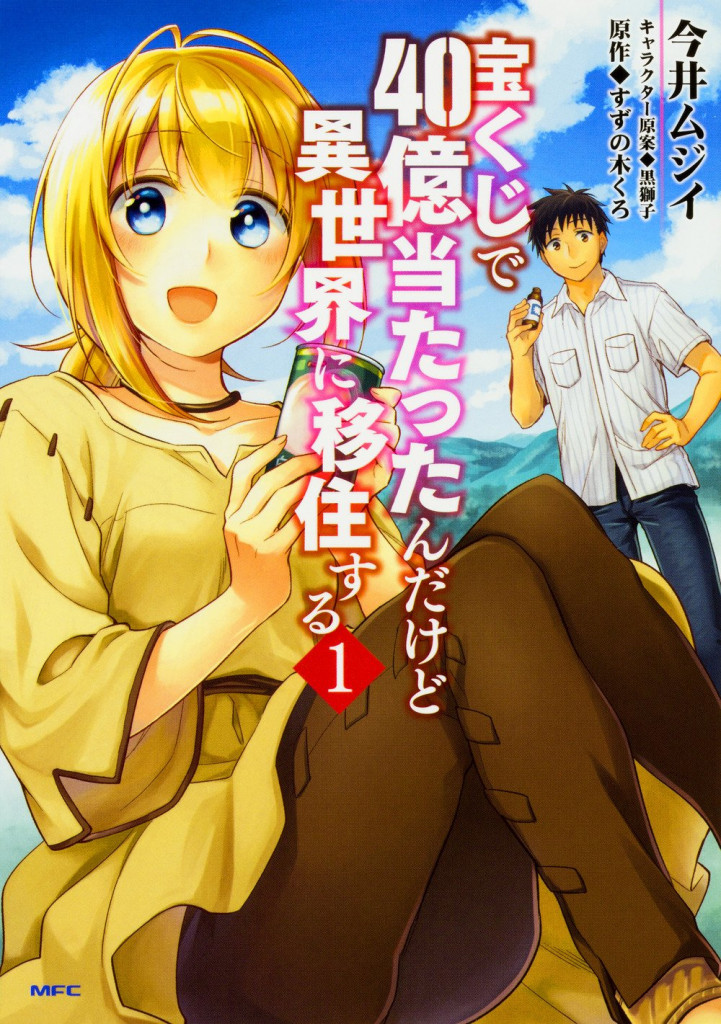 What would you do with 40 billion yen? Buy a villa? Get a pool? Travel? Well not Kazura! He is doing something totally different with his money.

The manga starts with our MC winning the lottery, and he is delighted. No more work! Apparently taxes don’t exist, or it is glossed over, but he now is a billionaire. He quickly finds a darker side to winning though, namely that people all want his money. He keeps being hounded by people asking him for donations or help. So he makes some calls and quickly moves to his ancestral house in the country side. What he thinks is going to be a quiet life turns different when he discovers a room in the house which is locked, and when opened leads to a whole new world!

Yep, I hear you say, gee, that is nothing new. Nope, we have a lot of isekai/other world stories. But I do have to say this one is different. There are no RPG elements, there are no monsters (other than power-hungry rulers), there is only a bit of magic (because apparently Japanese items are magical). Other than that? This first volume is all about Kazura spending a lot of his money saving the village close to the portal. A village full of sick and hungry people. People who apparently have absolutely zero clue how to do farming, or anything to get food. 😛 At least that was the impression I got. Thankfully for them they have Kazura(-sama) now. He gets medicine, food, tools, and some other stuff for them.

It was fun (and cute) to see the reactions of the villagers to all the new things. They weren’t even too afraid to try things, they just went for it. Just like kids would often do.

But it was at times just too weird. That he would just spend millions of yen to them, that no one really doubted him (only just a fleeting moment) considering the magical proportions of his stuff (yes, everything that comes from Japan works magic on them and everything around them). But I guess the villagers are too happy with the food and the help to care about the further details. I guess I would also be the same. Oh someone brings food, tools, and cares about us. Eh, he must be good. 😛

I am shipping him with the village girl, they are just too adorbs together. I do hope that it will work out for him (and her). I will support them fully!

Also we have some parts with the richer folk in the city, not too sure if I like those. I am especially not too happy with the ruler and his daughter (though at times she is quite awesome as she isn’t like all the other rich spoiled girls, thank heavens for that). But I am wondering how long it will take for the ruler or one of his subordinates to go to the village. What will they tell him?

I am also worried about what would happen when the village will find out where Kazura comes from. How will they react? Will they believe him? Will they want to see it for themselves? And not only that, but what if the ruler finds out about this portal?

The art to the manga is pretty decent. At times quite pretty, at times a bit less. But the mangaka definitely has an eye for details. 🙂

All in all, I will keep on reading this manga, it was quite fun to read. I am curious what Kazura will do in the next volume. What kind of things will he do for the village next?