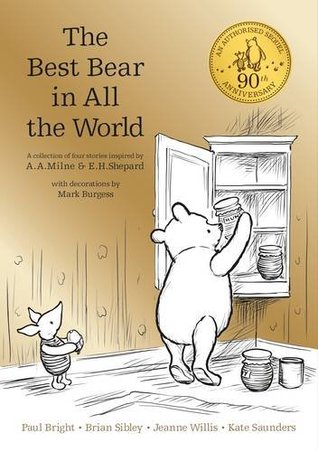 Happiest of Birthdays to one of my favourite bears! Winnie the Pooh!

It is his 90th birthday and what better way to celebrate than with 4 new seasonal stories! From dragons to penguins. Old friends and new friends!

I was a bit worried at first, after all this book isn’t written by the original writer: A.A. Milne, and also not illustrated by the original illustrator: E.H. Shepard. Instead we have illustrations by Mark Burgess and stories by Paul Bright, Brian Sibley, Kate Saunders, and Jeanne Willis. But after reading I can safely assure everyone that these people captured the old charm. It was just like the original author secretly still had some unpublished work. I was teleported straight back to my childhood.

There are 4 stories, each taking place in a season. From winter when we meet a new character, Penguin (who I didn’t quite like but that more had to do with his stuck-up politeness) to Summer where Pooh is dreaming about the Sauce of a river (which had me in stitches as this was so typical of Pooh to mishear stuff).
Let’s see my top story was the Sauce one, after that the dragon, Eeyore and his suspicions, and lastly the winter story with Penguin (again mostly to do with Penguin).

Each story was just so Pooh, so lovely. I enjoyed them all, laughed, cheered, and was delighted to meet all my old friends again. They never changed, they were the same as always. Tigger being hyper, Piglet always afraid of everything (then again, I would probably too if I was that tiny), Owl who always tries to act like he knows everything but is actually mostly just making up lies. And all the other characters. I missed them!

I still love how Christopher never gets tired of his friends (he does find new friends, but he never abandons his old ones). And how kind and friendly he is. How he always tries to explain Pooh what is going on and also tries to help him out when he is confused about something.

The illustrations are perfect. You can see that they are a bit different from the original, but it is still very very close to the old ones. The illustrator definitely did a fabulous job.

All in all, this is one collection I would highly recommend. As for me I guess I will need to get the other Winnie the Pooh books and re-read them. I am in the mood for some more Hundred Acre Woods and the friends that live there.